Geek's Guide to Britain I’m in a room that, in normal circumstances, is not fit for human habitation. It features a number of big red buttons surrounded by illuminated yellow rings – just in case. “Push button to switch off Jet. Press only in case of extreme emergency,” the signs read, informatively.

This is the Torus Hall, a 40,000m3 space the size of an aircraft hangar with two massive fly-towers that house 1,100-tonne doors to seal the room off from an adjacent assembly hall. The walls and ceiling are two metres thick. The atmospheric pressure inside the hall is kept lower than pressure outside so that in the event of a breach, air would be sucked in rather than vented.

The hall houses possibly the closest thing on Earth to the centre of a star: the Joint European Torus, the world’s biggest fusion reactor at the Culham Science Centre in Oxfordshire, UK. Jet is a tokamak, a circular structure shaped like a doughnut that employs powerful magnets to control that stuff of science fact and fiction: plasma. 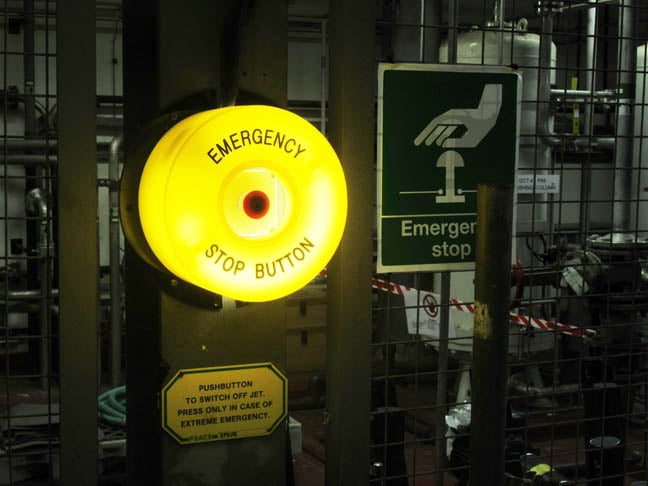 The interior of the reactor can exceed 300 million°C, twenty times hotter than the centre of the Sun. Jet manages this through a variety of methods including microwaving, albeit at a different frequency to that used to excite the water molecules in your curry.

Fortunately, Jet is undergoing maintenance. We are experiencing less radiation than if we were outside, thanks to those thick walls.

“Jet was built as a physics experiment,” James Edwards, a control software engineer on the project, tells The Reg on our tour. “Iter is more of an engineering experiment.”

Jet is a European project involving 40 laboratories and 350 scientists. In 1997 it set a record, producing 16MW of fusion power from a total input power of 24MW.

Iter, however, is a scaled-up version of Jet currently under construction in the south of France planned to open in 2025 – a fusion reactor that aims to use 50MW to generate 500MW for 500 seconds. Iter, in turn, will pave the way for Demo, one or more proof-of-concept fusion power stations, with South Korea aiming to put a Demo live in 2037.

For now, however, Jet is the world’s biggest fusion device and proves that nuclear fusion can generate power – it’s just not big enough to create more power than it uses.

During its lifetime it’s been upgraded to become more like Iter so it can carry out experiments to support its design. Changes include metal walls made of beryllium and tungsten rather than carbon, Jet’s Neutral Beam Heating system upgrade to 35MW and a High Frequency Pellet Injector, capable of shooting 50-60 deuterium ice pellets per second into Jet plasmas as a step to refining Iter operations.

The science is geared towards building fusion reactors, a power source of the future. 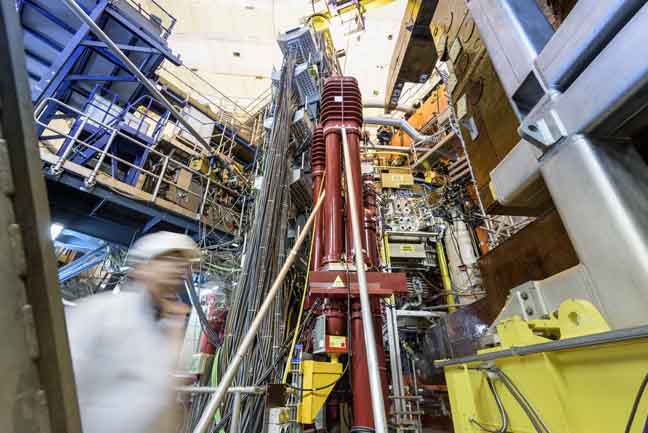 You usually wouldn’t want to be this close to the star-fusion doughnut. Photo: UKAEA

Fusion is cleaner than fission, the process used in nuclear reactors; fusion’s radioactive waste is relatively safe after a century and reactors aren’t prone to irradiating half a continent when they break. The fusion process turns two forms of hydrogen – deuterium (extractable from water) and tritium (produced with lithium) – into the inert gas helium – and neutrons, which can generate power.

It’s serious science, but not too serious to exclude visitors. Culham is open to pre-booked visitors, holding open evenings in addition to a school programme.

Approaching can be a little off-putting. With its wire fences, straight wide roads, numbered blocky buildings and sharply cut grass, Culham Science Centre feels like the military base it originally was. The 80-hectare site served as HMS Hornbill, a WWII airfield operated by the Fleet Air Arm; the main roads were once runways.

But the relaxed styles of clothing sported by staff show it is populated by scientists, not squaddies.

In 1960, the UK Atomic Energy Authority needed a new centre for research on nuclear fusion; Culham was just 16km (10 miles) from the organisation’s base at Harwell and convenient for Oxford and London, Didcot power plant and the high-voltage Supergrid.

Fusion research used to be a sideline for UKAEA, which built the UK’s atomic weapons, opened nuclear fission power stations at Calder Hall in Cumbria and Dounreay in northern Scotland and carried out their initial decommissioning. 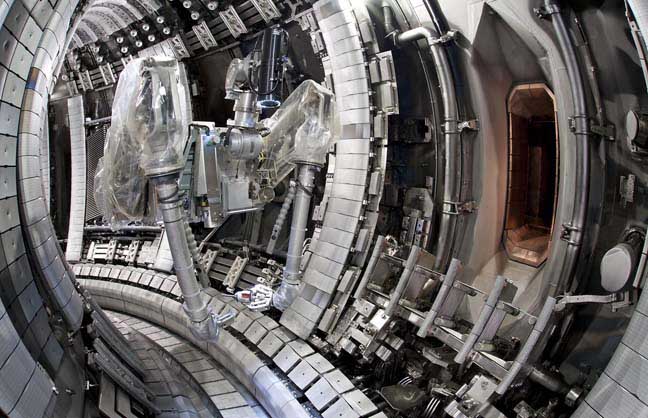 Now UKAEA is primarily focused on fusion, having hosted research at Culham for more than three decades with funding from 28 European countries. Jet was the product of discussions during the 1970s for an EU fusion project. Culham was selected and construction started in 1977, with operations commencing in 1983 after a decade of design and construction. The first controlled deuterium-tritium fusion power was produced in 1991.

In 1997, Jet set the world record for power generation by a nuclear fusion experiment, with that brief pulse of 16MW. But that pulse needed 25MW to make it happen – power consumed by the reactor’s magnets to generate the immense heat required to turn hydrogen into plasma.

Don’t take that mug to the Control Room!

As well as being an engineer, James Edwards acts as a guide for the centre’s open days and evenings. He starts our tour in a somewhat dated reception area that includes an original scale model of Jet – built before AutoCAD systems to make sure everything would fit together – complete with period-bearded engineer.

Edwards has worked at Jet since getting his computer science and maths degree and now helps run the graduate scheme he was once enrolled in. He says that he enjoys the work because of the variety, the fact that it’s “just a really interesting project” and that it involves “working towards one very ambitious goal that will fundamentally change power production in the future”.

We take a corridor to the Machine Control Room, which is replete with screens, ring binders and “No drinks or mugs are to be left here or taken anywhere in the control room” signs. Today the room is quiet, but when Jet is working, there would be some 40 people here, led by the engineer in charge from a seat with “EIC:” on the back.

Next page: What’s under the hood?
Page:

Opinion Information wants to be free, and it's making its escape
Networks18 Oct 2021 | 118