What’s under the hood?

Jet uses a range of operating systems and hardware, with its IT infrastructure known as CODAS – control and data acquisition system – in reference to its two main key roles.

“In the realm of the control systems, the closer to the machine you get, the technology tends to be older,” says Edwards.

Many systems use the Camac electronics standard developed in 1972, with more recent upgrades using VMEBus technology from 1981. Data collection and acquisition uses Camac, with Linux and Windows desktops talking to lower-level equipment. 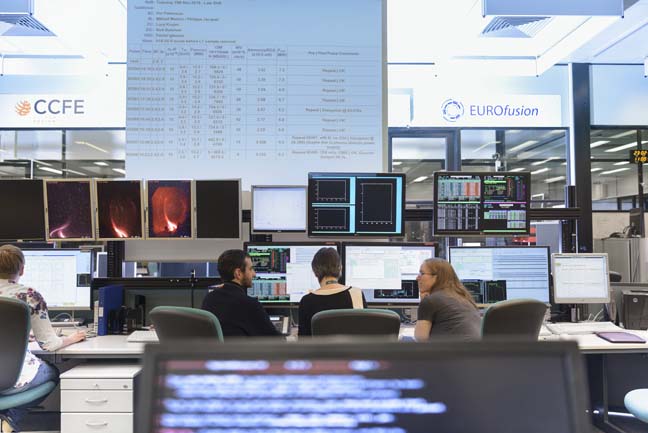 Edwards says that the control room’s software is mostly custom-written, “as it has to operate and co-ordinate technology from four different decades,” although more recently staff have taken advantage of common systems used by other labs. Other software runs on Fortran, C, TCL, Perl and Python and a few bespoke languages developed in the 1980s and 1990s.

Jet uses a 450TB data warehouse, with each fusion pulse adding an average of 38GB – somewhat more than the 172KB generated by the first recorded pulse in 1983. “The CODAS infrastructure takes and processes almost 100,000 hardware signals from the Jet plant equipment during a pulse,” says Edwards, adding that there are millions of parameters that can in theory be changed for each pulse. In 2015 the site handled 9TB of internet traffic.

As well as computing power, Jet requires a lot of electrical power. One desk has a lime green phone hotline to the National Grid; during a pulse Jet can draw as much as 575MW through a direct connection to the grid’s high-voltage network, and it gets surcharged if it pulses during a peak demand period.

Despite this, Jet doesn’t run at night. “If we had an industrial version of an Economy 7 tariff for the site, it’s true that we’d get cheaper electricity at night, however, we have to balance cheaper costs of electricity overnight with the cost of paying more staff a bit extra to work abnormal hours,” says Edwards.

With two pulses an hour during typical operation, a bigger electricity bill is still less than paying expert staff to work nights.

“Although it’s big, it’s easy to forget how big it is when you’re in there, given that Jet takes up most of your view,” Edwards says of the hall. He’s right, although it’s also hard to see Jet itself, surrounded as it is by towers of scaffolding, pipes and auxiliary equipment. Altogether, the effect is of a partly finished science experiment on a massive industrial scale – which, right now, is pretty much what it is. 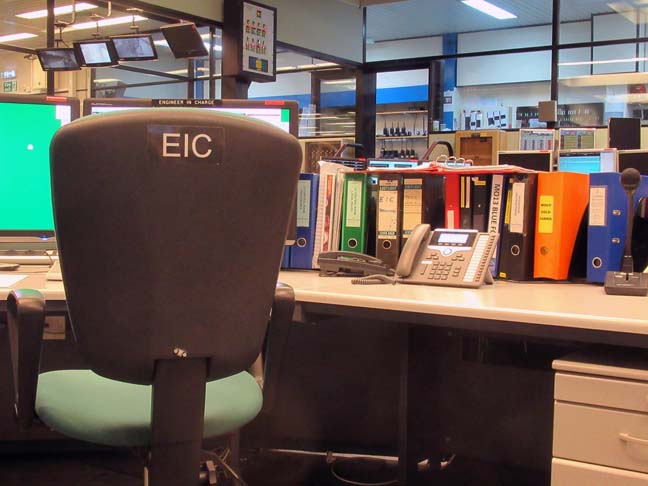 There are videos of Jet’s interior during a pulse, with bright rivers of light flowing in and out of existence, but the nearest visitors get to seeing inside is a mock-up in the assembly hall used for training and by television presenters.

Its interior is basically a curved passage about three metres high and two across with the walls covered in panels and technology. It looks rather like a modern-day Tardis without the central control deck, but it’s smaller on the inside than on the outside with a total volume of just 90m3. Iter will more than double each of Jet’s parameters to a volume of 840m3, while the planned Demo reactors will reach 1,8003 to 2,400m3.

Across the site, the Remote Applications in Challenging Environments (Race) lab is aiming to build on Culham’s experience of maintaining Jet with Mascot, a remotely operated robot, to develop remote handling technology. As well as providing a base for Oxbotica, the University of Oxford spin-out company that tested an autonomous vehicle in Milton Keynes last year, Race includes a training and testing facility for smaller remote vehicles.

Guy Burroughes, a control systems and software engineer, provides a virtual demonstration of the robots Race is developing as a control system for the European Spallation Source in Lund, Sweden, a neutron source (effectively a giant microscope) within a sealed 15-metre cube.

Race, which opened in 2015, is also working on a 200-tonne semi-autonomous robot tool that would help maintain Demo power stations. 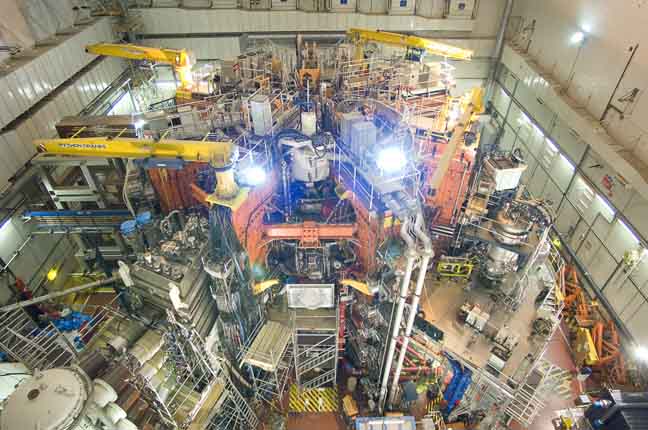 Race is Burroughes’ first employer, following his doctorate in space robotics. “It has a very good balance between practical industrial-delivering-results and academic,” he says. “It gives you a good balance of taking your ideas all the way through to delivery, and that’s very rare to find.” He adds that, when Jet is in operation, it’s also nice to be working so close to “the hottest place in 20 parsecs”.

Jet is a European project, and around 100 of UKAEA's total 1,200 staff are from EU countries other than the UK, so Culham is exposed to Brexit. Jet’s money comes through Eurofusion, a collaboration that includes non-EU Switzerland, but the current funding runs out in 2018 – half-way through the Brexit talks.

UKAEA and Eurofusion plan to keep Jet running until 2020 and perhaps beyond to support preparations for Iter, but this depends on agreement between the UK government and the European Commission, because (at time of writing) Brexit means leaving Euratom, the EU nuclear power organisation.

UKAEA strikes a positive note, saying the UK government has committed to funding the UK’s share of Jet’s post-2018 costs and adding: “Hopefully Euratom will form part of the early UK/EU negotiations so this issue can be fully resolved.”

However, there is also a UK-funded fusion experiment on the Culham site – the Mega Amp Spherical Tokamak (Mast), which has a near-spherical chamber with a much thinner core than Jet. “It provides an option for how we can achieve fusion power more cheaply,” says Kim Cave-Ayland, control engineer for the Mast Upgrade project. This has seen Mast closed since 2013 to install more powerful equipment including the ability to test better divertors, the exhaust system for spent plasma.

The upgrading means that Mast currently has much less equipment surrounding it than Jet, revealing it as a 4m X 4m metal cauldron with portholes. The upgrade is changing most of the kit except for this vacuum vessel and should be complete by the start of 2018 – although that date has been put back already. 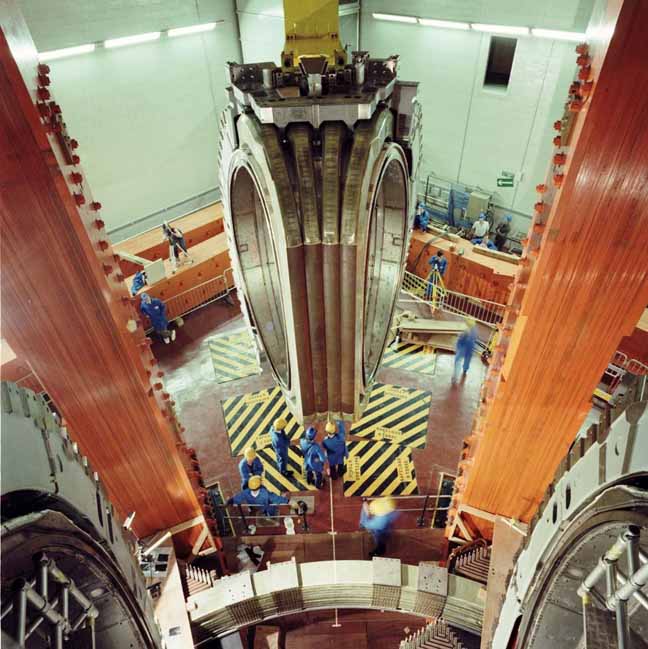 With a spherical shape likely to be cheaper, results from the new Mast can feed into design plans for Demo and subsequent power plants. “It’s an option that’s becoming increasingly looked at,” says Cave-Ayland. “It’s still a while away; we still don’t completely understand the physics of the spherical tokamak.”

But the upgraded Mast could point the way to nuclear fusion power at a lower price.

Leaving aside the benefits to humanity, what would happen if someone got inside Mast during a pulse? “Nothing,” says Cave-Ayland. “You’re too big an impurity.” Before use everything is pumped out; anything inside would prevent the reaction from starting. “You get the occasional dead spider,” she adds.

Happily for the good people of southern Oxfordshire, a complete failure of a tokamak would have similarly undramatic consequences. At worst, “the machine would break itself,” Cave-Ayland says. “It’s much more difficult to get these machines running in the first place and to keep them going than anything else. If something goes wrong, the plasma pretty much instantaneously cuts itself out.”

Cave-Ayland, who has a doctorate in power supply control systems, knew about Culham through her father installing metering here for National Grid. She joined a tour, heard it was looking for power experts and successfully applied. She says it lets her work across a broad range of topics, allows her to learn and has her working on a project that hopes to change the world. 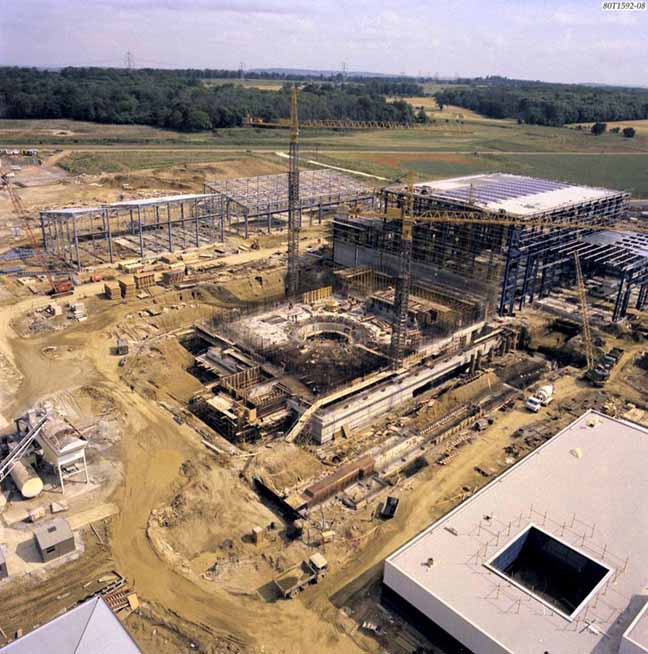 Back outside it’s down to Earth. You depart this world of mega physics for the every day ambling greenery of Oxfordshire and Thames country. Jet lies two miles to the east of the village of Culham itself, nestled in a deep bow in the River Thames. The river and its long-distance path meander around the site, with the nearest point half a mile away in the village of Clifton Hampden. The market town of Abingdon is a little further on, and comes complete with the abbey, river and heritage walks, and places to eat and stay. Oxford lies just further north again.

No extremes of heat and pressure here but pause for long enough after sunset and, if you have a clear night and look up you’ll see the real thing in action. Dwell on that and recall Cave-Ayland’s words to me on her work at the tokamak.

“I can tell people I make stars, which is pretty cool.” ®

By train: Direct train to Culham station from Paddington then a short walk to the main entrance. Faster service to Oxford or Didcot then join a stopping.
By car: A415 between Abingdon on the A34 and Berinsfield on the A4074.

Free on selected Wednesday evenings and Saturday daytimes, open to those aged 14 and over. The centre warns tours involve a fair bit of walking and people with pacemakers and other medical implants will not be allowed in some areas. Details here.