Analysis Every two years or so NetApp brings out a new E Series flash box that stores more and goes faster than the last one. This month we have the EF570 arriving, updating the 2015-launched EF560. NetApp claims benchmark-backed price/performance leadership and NVMe-over-fabrics support, and we reckon this deservers a closer look.

The E-Series flash arrays are intended for on-premises high-access rate work such as big data analytics, intensive video surveillance analysis and that sort of thing, leaving general CSP-type work to the SolidFire arrays and fast storage access in the ONTAP environment to NetApp's all-flash FAS arrays.

Compared to the EF560, the new box has significantly faster interfaces, large-capacity SSDs and better performance. There must be a brace of better Xeon CPUs in its two controllers but NetApp hasn't yet revealed any details.

The 15.3TB SSDs could be Toshiba CM5s, which are 64-layer 3D NAND drives with dual-port, PCIe Gen 3 x4 NVMe connectivity. But there are Samsung 15l.36TB SAS SSDs also available; the PM1633a range. NetApp hasn't said which type it is using. 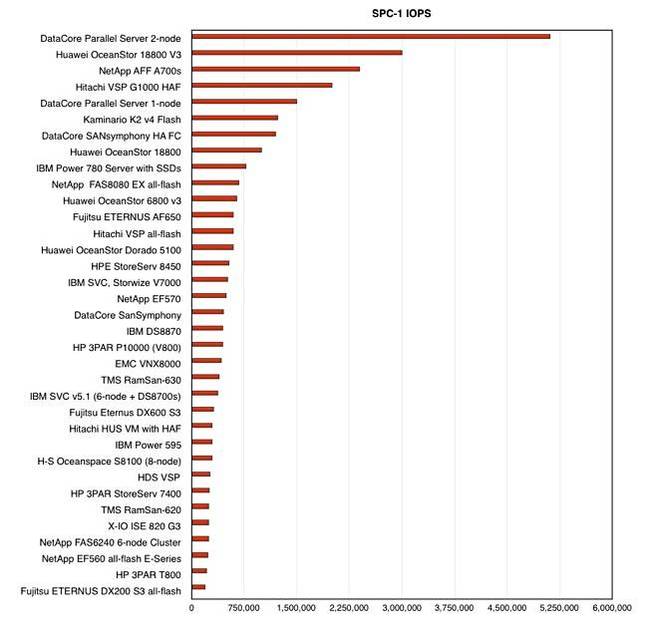 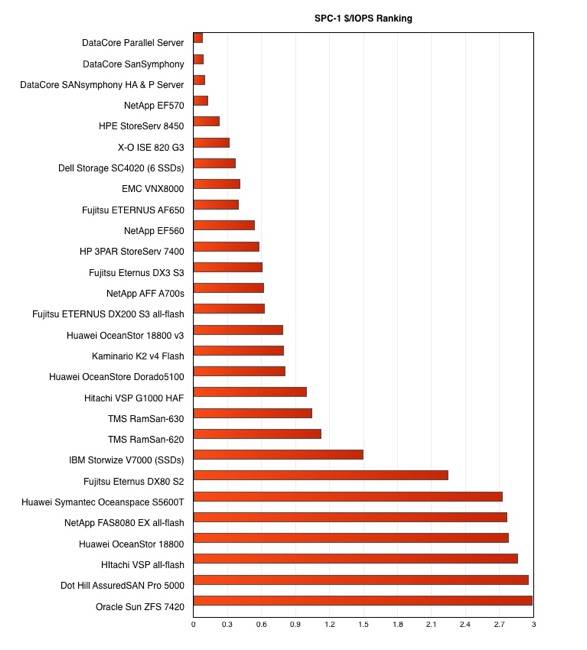 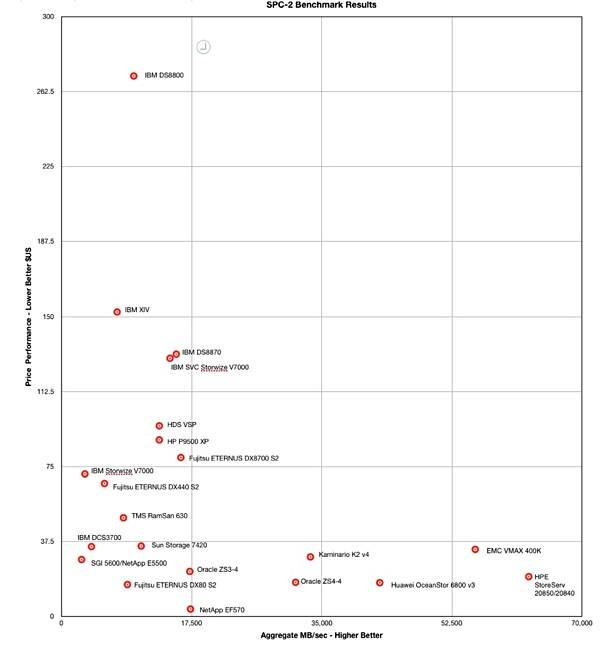 SPC-2 chart of price/performance and bandwidth. Click to enlarge

The EF560 SPC-2 benchmark configuration used multiple 12Gbit/s SAS connections to the host servers and, we understand, SAS-connected SSDs. This means we don't have an NVMe-over-fabrics performance data for the array.

We don't have an EF560 SPC-2 result for comparison, nor any DataCore results, possibly just as well. NetApp says the EF570 "has demonstrated the world's leading price/performance results for both SPC-1 and SPC-2 benchmarks in the same system. With price/performance ratios of $0.13/SPC-1 IOPS and $3.69/SPC-2 MBPS, NetApp has established its standing as the storage industry's price/performance leader for transactional and bandwidth workloads." True dat.®

* The SPC-1 benchmark consists of a single workload designed to demonstrate the performance of a storage subsystem while performing the typical functions of business critical applications characterised by predominately random I/O operations and require both queries as well as update operations.