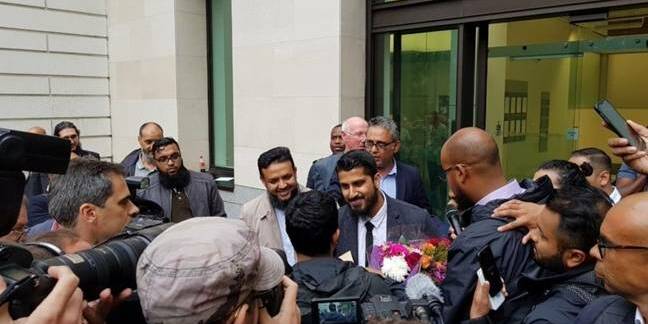 Muhammad Rabbani, international director of human-rights non-profit CAGE, was today convicted under UK anti-terror law for refusing to unlock his iPhone and laptop for police when entering the country.

Rabbani, 36, was found guilty at Westminster magistrates’ court of willful obstruction under Schedule 7 paragraph 18(1)(c) of the 2000 UK Terrorism Act. This law gives Brit cops the right to detain anyone entering Blighty on suspicion alone and hold them incommunicado for up to nine hours.

The plod also insists the anti-terror powers allow officers to demand people's login details for their laptops, phones and other devices, so that data can be extracted for forensic examination and storage.

The Londoner was cuffed at Heathrow airport in November after returning to the UK from attending a wedding in Qatar. While over there, Rabbani had interviewed someone who claimed to have been detained and tortured by the US authorities.

After landing in England, the human-rights activist was ordered by police to unlock his hardware at the airport. He refused, saying he had sensitive legal documents on his devices that he wanted to keep private to respect his client's confidentiality. He was later charged with willful obstruction. Below is a video of Rabbani explaining his reasoning.

"The importance of passwords and privacy cannot be overstated in the 21st century," chief magistrate Emma Arbuthnot acknowledged during today's sentencing hearing. He was also of good character, she said, but declared that Rabbani had taken a "calculated risk" in not providing passcodes to the police.

During his trial in the UK capital, the court was told Rabbani had been detained at least 20 times by the police when entering the country, but said he had never had to give up his passcodes before. He faced a possible three months in prison but instead was given a 12-month conditional discharge, meaning he is free to go, and told to pay £620 ($835) in court costs. He'll be back in court for re-sentencing if he breaks the law again within the next year.

"Today's judgment based on the judge's and prosecution's acceptance that I am of good character and worthy of belief, highlights the absurdity of the Schedule 7 law," Rabbani told The Register in a statement.

"They accept that at no point was I under suspicion, and that ultimately this was a matter of having been profiled at a port. There are important implications for our collective privacy as Schedule 7 acts as a digital strip search. If privacy and confidentiality are crimes, then the law stands condemned."

CAGE, a somewhat controversial group that campaigns against the West's TWAT*, said it would appeal the case to the High Court, and claimed it had "won the moral argument." ®

* The War Against Terror.