Research There are many reasons why someone might not be using an All-Flash Array. It might be that you can’t get the budget, say, or that you think it has been over-hyped. Maybe you are sceptical about whether your application set would benefit from it, or if it would fit into your operations seamlessly.

Whatever the reason, recent research from Freeform Dynamics shows there’s one thing non-users have in common: they are much less likely to recognise what Flash technology is really capable of. Instead, they often have a more limited view of the opportunities it offers, and may underestimate its potential as a strategic enabler both for IT transformation and for business transformation more broadly.

Indeed, when we surveyed over 300 Reg readers earlier this year, one of the findings that stood out was just how strong the difference in attitudes was between those whose organisations already owned and used AFAs and those who did not. In short, actual experience with AFAs is key to understanding the possibilities they offer.

For example, while most people accept that Flash provides faster and more consistent access to data, AFA proponents also argue that, for a variety of technological reasons – including higher density, lower and more predictable latency, and no moving parts – an AFA needs less power, cooling and rack-space to do the same job as a disk-based array.

Not too surprisingly, there has been anecdotal scepticism over some of the advantages claimed for AFAs, such as its ability to improve data centre economics – doubt that was echoed to some degree by 43 percent of those without AFA experience. Yet we found that barely two percent of current AFA users disagreed with this proposition, and more than 80 percent agreed that AFAs do indeed benefit data centre economics (Figure 1). 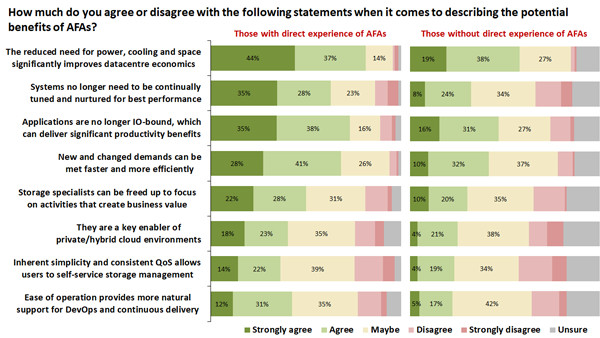 We also found that experienced users recognised the advantages and opportunities that AFAs bring to operations and applications. For instance, they were more likely to perceive operational benefits from AFA technology in areas such as IT automation and the reduced need for manual system tuning, the removal of IO bottlenecks, the ability to respond to new and changed demands faster and more efficiently, and allowing users to self-service storage management. Again, the non-users were more sceptical about these benefits.

These two groups also have quite different ideas of which applications and workloads can benefit from being hosted on Flash.

First, those without direct experience were mainly aware of widely-hyped uses such as hosting databases and virtual servers. However, those with practical experience of AFAs recognised the technology as being far more widely applicable. Indeed, when we dug into their feedback we found them discovering all sorts of initially unplanned use cases, such as big data, cloud hosting, collaboration and workflow, and even rapid backup and recovery (Figure 2). 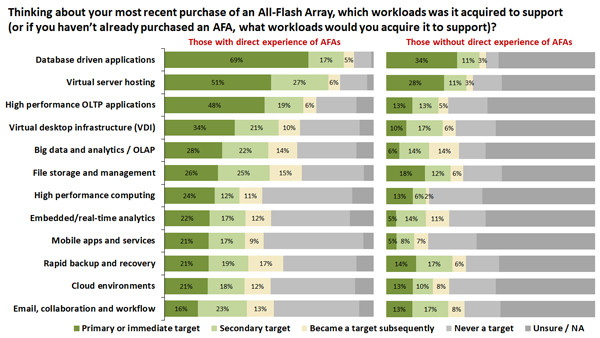 Reg readers are clearly telling us that once you have worked with AFAs, you ‘get it’ – recognising not just the specific opportunity to accelerate and improve your applications, but also the broader opportunities to reduce the admin load and to fundamentally transform key aspects of both IT and business operations.

The problem – as usual with new technology, of course – is that if you don’t have that AFA experience, you are much less likely to be aware of all this. Indeed, you might still be thinking of the technology as it was just a few years ago, when it was in effect merely a faster disk array with a shorter lifespan. Today’s second generation AFAs are far more advanced, but still we see non-users displaying uncertainty and doubt – doubt which experience shows is rarely justified.

Does this chasm in awareness suggest that the storage industry must do more to communicate the full potential of AFAs and the growing range of use-cases? Absolutely, even if some might argue they’re already too busy trying to keep up with demand – our survey showed just how broadly AFAs are being used now.

Still, if you are already an AFA user, don’t be shy in telling your peers about it – they may not yet appreciate its full potential. And if you’re not using an AFA yet, you may discover that it is a lot more relevant than you thought, especially if like so many colleagues you are under pressure to improve IT productivity and drive wider digital transformation.

If you’re interested in finding out more about the research you can download the full report, All-Flash Arrays: A catalyst for transformation here.

Bryan Betts is an analyst at Freeform Dynamics.