A quick guide to this week's reveals 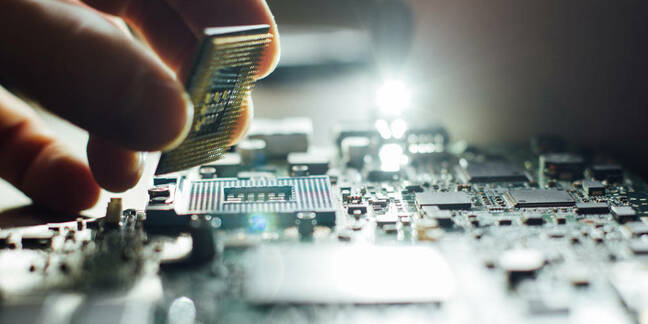 AI roundup Here's your weekly dose of key announcements in the world of artificial intelligence. The flurry of hardware-related news shows how machine learning software is reinvigorating chip design.

Chipzilla's "self-learning chip" Intel is the latest company to hype up a chip specialized for AI. But it's not a GPU, a CPU, nor an FPGA... it's a neuromorphic chip codenamed Loihi. Anything to distract from its 10nm problems, the cynics among us are thinking.

Neuromorphic progress: And we for one welcome our new single artificial synapse overlords

Neuromorphic computing loosely mimics the activity of a brain. The circuits are programmed to fire like activated neurons passing information to the next group of neurons, and so on. It's an area that Intel has been interested in for a while. Loihi uses Intel's 14nm fabrication process, and has a total of 130,000 neurons and 130 million synapses, we're told. When it'll arrive on the scene is anyone's guess. Boffins will be offered the silicon in the first half of 2018, it's claimed.

Apple reads the writing on the wall Apple has updated its machine-learning blog with a paper describing the "real-time recognition of handwritten Chinese characters spanning a large inventory of 30,000 characters." The team behind the tech concluded: "Building a high-accuracy handwriting recognition system which covers a large set of 30,000 Chinese characters is practical even on embedded devices."

Are Tesla and AMD really working on a chip together? Last week, it was claimed Elon Musk's Tesla was working with chip fabricator Global Foundries to manufacture an AI processor for its self-driving cars. The rumor was circulated by CNBC, but the US telly news channel later reworded its report to say Global Foundries is not working with Tesla. An unnamed source in the story alleged Tesla is working with AMD – presumably using one of AMD's semi-custom or embedded designs – for the robo-rides' neural-network accelerator.

It's not news that Musk is interested in developing custom chips for his fleet of autonomous vehicles – he hired processor guru Jim Keller and a bunch of other silicon engineers, after all – but a collaboration with AMD would be interesting, as it shows chip companies are pairing off with self-driving outfits to drive competition. Intel is working with Waymo, and it's assumed Nvidia is working with everyone else.

We asked Tesla and AMD for clarification. A Tesla spokesperson said: "Tesla's policy is to always decline to comment on speculation." AMD declined to comment. Global Foundries, which grew out of the x86 designer, confirmed it wasn't collaborating with Tesla.

Meanwhile, it appears Tesla has tapped up Intel for its in-vehicle entertainment. So it all seems rather up in the air, for now. ®