Scale Computing has replicated its HC3 hyperconverged platform in Google's cloud and provided app and data interchange between the on-premises and public cloud worlds in its very own data fabric.

The company sells its HC3 clusters of hyperconverged systems. They host apps in KVM virtual machines running under the HyperCore OS and using Scale's Scribe software-defined storage. Typically these HC3 systems will be hooked up to a local LAN.

Scale has developed an SD-WAN capability and, with Google, ported its HC3 software environment to the Google Cloud Platform (GCP). The on-premises HC3 server hardware is replaced by Google's Cloud Engine, and takes advantage of Google's just-announced nested virtualization feature. 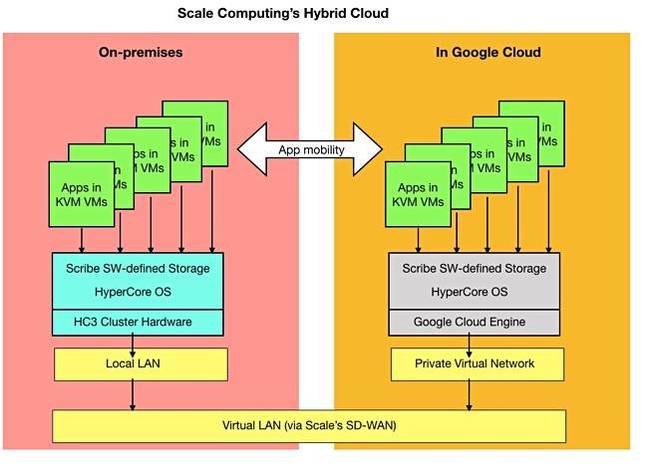 The resulting Scale offering is called HC3 Cloud Unity. It says that, with HC3 running both on-premises and in Google Cloud Platform, Cloud Unity creates a virtual LAN that seamlessly bridges an on-prem local LAN with the private virtual network on GCP. This allows IT organizations to connect to the cloud in real time from their on-premises infrastructure.

As a result, the on-premises apps using Scale's HC3 environment see the Google Cloud Platform as part of that environment. Scale CEO Jeff Ready said: "The Google Cloud shows up as an IP address on your LAN. Moving in and out and sharing cloud and on-prem resources couldn't be any easier once that happens."

It's been a work in progress for two years, with Ready saying: "Google approached us after seeing my CTO at a conference. We both use KVM on the virtualization side, which is where the ideas started. In the end this combines a whole bunch of tech.

"There's obviously the Google Cloud, but this also takes advantage of their new nested virtualization tech which is being release simultaneously with this offering. On our end this uses our core HC3 platform, our software-defined storage tech, and added here is new SD-WAN tech from us."

He said: "Google and Scale have laid a massive two-way speedway across the HC3 clusters on-premises and HC3 on Google Cloud Platform. This network means organizations no longer have to use or create different apps for the cloud – they can utilize their apps created for on-prem to run in the Google Cloud, which will be a game changer for end users, channel partners and MSPs globally."

Nutanix has a similar on-premises to public cloud coverage strategy with its Enterprise Cloud OS.

Theoretically it should be possible for other hyperconverged (and converged) system suppliers to do the same thing with VMware's ESXi and AWS or Microsoft's Hyper-V and Azure. It did take two years for Scale and Google to develop HC3 Cloud Unity, so any me-too type of work from other suppliers won't be an overnight job.

Cloud Unity will be available before the end of the year. ®