Good Q2 news for Cisco, NetApp and a few others. Yep, just them

IDC's latest Worldwide Quarterly Converged Systems Tracker shows a flight to the top vendors, away from HPE, Hitachi and the Others' category, with the hyperconverged sector being the only growth area.

Worldwide converged systems vendor revenues increased 6.2 per cent year over year to $3.15bn, and those overall stats break down to:

Compare this table to the June 2017 one here if you're interested in quarter-on-quarter changes. TL;DR summary is hyper-converged sector grew less strongly and other sectors declined at a weaker rate.

Well, well, isn't that a shocker? Cisco/NetApp (meaning Flexpods) make a big leap. Dell EMC grows more than the market, which declines 1.5 per cent year-on-year, while HPE's share drops by 36.5 per cent – a collapse.

The others category drops 23.3 per cent; it declined just 3.3 per cent last quarter so it looks as if there is a flight away from these other suppliers – virtually all of it to Cisco/NetApp and with Dell EMC picking up a little business.

It broadly echoes what happened last quarter when Cisco/NetApp grew 26.1 per cent from its then year-ago $313mn revenues. Now that number is $516.1m and, whisper the thought, Dell EMC is in reach in a couple of quarters at this rate.

The instant takeaway is that only Oracle's business in this area is growing – everyone else is falling away as the market shrinks. HPE and the Others' categories are declining the most.

A realisation from a look at last quarter's numbers is that Hitachi has dropped into the Others' category. IBM grew its share from the 3l.1 per cent recorded last quarter and avoided a similar fate.

As before and still as annoyingly IDC doesn't provide a similar breakdown for the hyperconverged category. It points out:

Hyperconverged sales grew 48.5 per cent year over year during the second quarter of 2017, generating $763.4m worth of sales. This amounted to 24.2 per cent of the total market value.

What we see comparing this to last quarter is that then hyperconverged systems amounted to 24.9 per cent of the market, and now its share is 24.2 per cent. This may not be a statistically significant decline.

Dell EMC wants us to know that: "Dell EMC has taken over the #1 spot in HCI sales, overtaking Nutanix, thanks to the continued strong growth of Dell EMC VxRail and XC Series appliances, VxRack Systems, vSAN Ready Nodes and ScaleIO Ready Nodes. Dell’s share of the HCI segment increased to 29.0 per cent in 2Q17, with Y/Y growth of 149 per cent. (IDC data shows Nutanix was #2 with 20.9 per cent of revenue share.)"

Here is an IDC chart showing the segment proportion changes over the past few quarters: 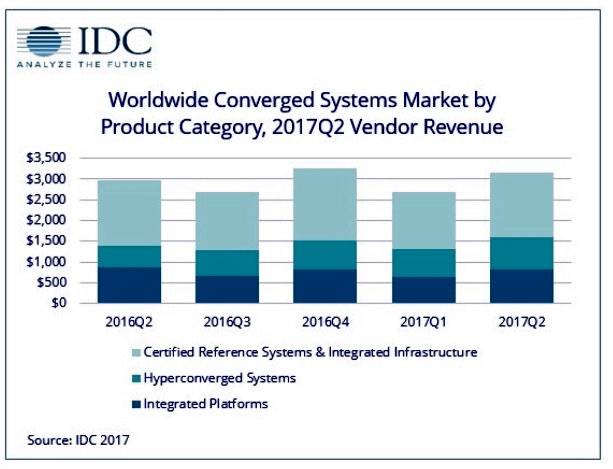 Will we see hyperconverged systems growth continuing to take up the slack left by the declines in other sectors in the future?

Overall this tracker is not good news for HPE, nor for Hitachi or the Others' category in various sectors. We're seeing a flight to the top vendors, which is good news for Dell EMC, excellent for Cisco and NetApp, satisfactory for Oracle, okay for IBM and pretty much a disaster for everyone else. ®