Oh, that's shingles. As you were

It is the world's first 14TB disk drive, and is helium-filled, as usual at these greater-than-10TB capacities. The disk uses shingled media recording (SMR) with partially overlapping write tracks to increase the areal density to 1034Gbit/in2. An earlier He10 (10TB helium drive), which was not shingled, using perpendicular magnetic recording (PMR) technology, had an 816Gbit/in2 areal density, and the PMR He12 has a 864Gb/in2 one. Shingling adds 2TB of extra capacity over the He12.

Previous WDC shingled helium drives had an "He" branding, as in He10, whereas this 14TB spinner has an "Hs" branding. 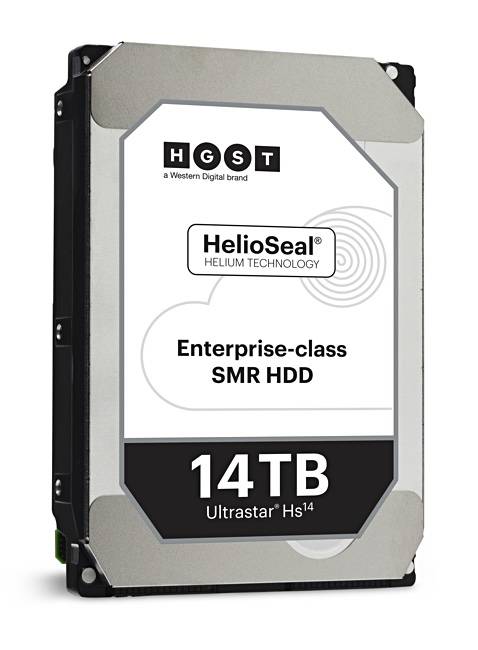 Ultrastar is an HGST brand, HGST being a WDC-acquired disk drive business from some years ago. There was an He12 PMR drive sampling in December 2016 and WDC said at the time it was developing a shingled version of that with a 14TB capacity rating. Here we are today with the Hs14 – the "s", we assume, standing for shingled.

Both the He12 and Hs14 drives have eight platters. Like the He12 this Hs14 drive spins at 7,200rpm, comes with either a 6 Gbit/s SATA or 12 Gbit/s SAS interface, and has a 2.5-million-hour mean time before failure rating.

Because of the host-managed shingling, the Hs14 is designed specifically for sequential write environments, and is not a drop-in replacement for other 3.5-inch form factor disk drives.

The Hs14 is said to have an extremely low Watts/TB rating, supports enterprise workloads up to 550TB/year, comes with Instant Secure Erase, and is sampling with OEMs. It is a specialised enterprise capacity drive for low/no data rewrite use cases and will probably appear in archival-type disk drive arrays.

Learn more about the drive here. ®