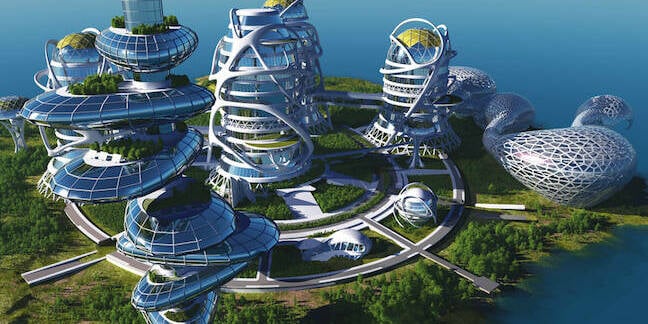 The Reg's UrbanVultureLab™ created its own vision of Amazon's new HQ

If you've never heard of Stonecrest, Georgia, you're not alone: the town on the outer fringes of Atlanta only voted itself into existence a couple of years ago. But it's now put itself on the map by offering to rename 345 acres of land “Amazon” in a bid to land Amazon.com's new headquarters.

The mall-disruptor and cloud colossus revealed its plans for a new headquarters earlier this month, dubbing it “HQ2” and calling for bids from locales with a million people, a big slab of land, easy access to airports and a willingness to offer it a tax holiday. In return, Amazon promised to bring up to 50,000 jobs, which would of course generate lots of lovely secondary employment.

Amazon also called on bidders to be creative. Which is where Stonecrest thinks it has a shot. The US city has voted to excise 345 acres from its territory and rename it “Amazon, Georgia” if only Jeff Bezos web bazaar will call it home.

“I believe we have a good shot at drawing that type of platform,” the city's mayor Jason Lary said in a September 18 statement announcing the city's bid. The plan to give Amazon it's own enclave was revealed on Monday night at a council meeting and Stonecrest is now revelling in the attention its scheme has generated.