North Korea's very limited Internet has, for the second time in its brief history, obtained a redundant connection to the outside world.

Dyn Research and North Korea specialists 38 North went public with the existence of the new link on October 1.

The pair speculate that given the pressure currently bearing down on the Hermit Kingdom, Norks is becoming wary of the leverage China has as its only link to the Internet, and is connecting to Russian fibre at the Friendship Bridge railway link between the two countries.

38 North's Williams notes that the US is pressuring China to “end all business with North Korea”, which would if carried out cut off that one slim link. A complete cutoff would, however, also deny the US a route by which it can attack Norks, something Williams says is happening.

There are four BGP routes in North Korea's Internet, announced as AS131279, and most of the time the country has only been reachable through China Unicom.

“Star JV has almost exclusively relied on China Unicom for its connectivity to the global internet — the only exception was its partial usage of satellite service from Intelsat between 2012 and 2013. In light of this history, a new internet connection out of North Korea is certainly a notable development.” 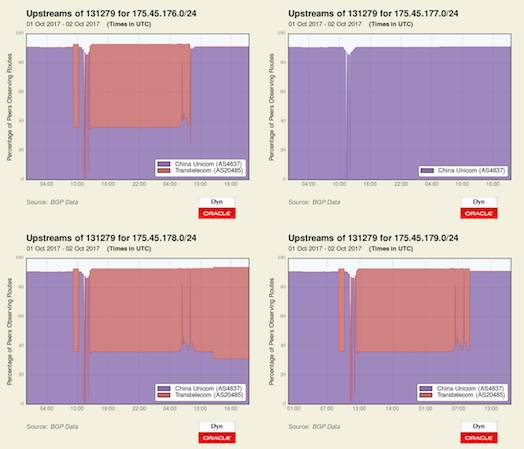 El Reg notes that the Intelsat link either reappeared or remained in use longer than Dyn says. In 2015, Cloudmark said that Star JV (the joint venture between North Korea's telecommunications ministry and Thailand's Loxley Pacific and the sole source of Internet) was still reachable via Intelsat.

Telecommunications isn't covered by the most recent round of United Nations sanctions against North Korea.

While four /24 address blocks only gives North Korea addresses for 1,024 hosts, it's perfectly reasonable to assume those hosts are routers with NAT – so although the Internet in the country is known to be small, we still don't know exactly how small.

Also unknown is why Transtelecom put itself in the firing line by doing business with North Korea at such a sensitive time. ®