Li-quid hot mag-ma: There's a Martian meteorite in your backyard. How'd it get there?

Asteroid smacks chunks off a volcano... but not as we know it

New research adds extra support for where exactly six meteorites that travelled from Mars to Earth millions of years ago, called "nakhlites", may have originated.

It also helps establish what the very unusual volcanic activity on the red planet at the time may have looked like. As the paper states, "Martian plume-fed edifices have remained connected to their magma sources for extraordinary lengths of time – in some cases for billions of years" – and have "grown to be the largest in the solar system". Earth volcanos, on the other hand, are only active for "a few million years" at most. 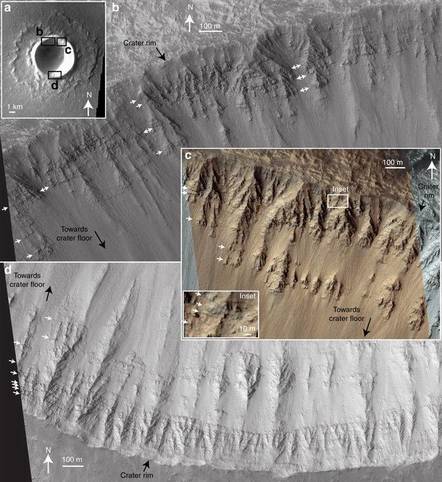 Taking the pulse of Mars via dating of a plume-fed volcano - A potential nakhlite source crater. Pic: Nature Communications

Compared to the friendly blue and green ball we call home, our neighbour is relatively quiet when it comes to volcanic eruptions. But Ben Cohen, a planetary geologist at Glasgow University in Scotland, told The Register Mars had been much more active in its early years, and understanding these volcanoes is important to understand how the planet evolved.

For perspective, the Solar System is about 4.5 billion years old. In Mars' infancy, a volcano grew quickly and erupted somewhere between about 1.3 and 1.4 billion years ago, he said.

Then, about 11 million years ago, an asteroid hit the volcano, leaving a crater and sending the materials rocketing to Earth. The six meteorites – weighing between 145g and 13.71kg – have similar chemical structures, so scientists have tried precisely dating them to understand if they came from separate lava flows or the same one.

But he said it was difficult to know which idea to believe because the uncertainty in the measurements was so high (PDF). Now, in research appearing in Nature Communications, Cohen and his collaborators have found their own age estimates that add further weight to the argument that the meteorites came from different lava flows.

By studying the radioactive decay of potassium into argon that happens naturally, the researchers found the meteorites all had different ages, suggesting that they indeed hadn't come from the same lava flow. They repeated the dating process two to five times for each and got the same result, Cohen said.

Allan Treiman, a geochemist at the Lunar and Planetary Institute in Houston, Texas, told The Register: "Taking the crystallization ages at face value, they appear quite distinct" and the idea they came from many lava flows is "much more reasonable" than the "commonly held theory" that they came from just one or two.

Thomas Lapen, a geochemist at University of Houston, agreed. The data "complements existing data for another type of Martian meteorite, the depleted shergottites, whose ages indicate volcanism from a single volcano or nearby volcanoes persisting for over 2 billion years."

The data from this new work is "important for understanding the magmatic processes on Mars," he added. ®