Toshiba, you can't have 14TB served on a platter. It'll take eight, at least

Big T lags in capacity stakes but could catch up soon

Analysis Toshiba lags behind WDC and Seagate in high-capacity 3.5-inch drives, having just reached 10TB. The other two are waving from 12TB and WDC has recently hit 14TB. How can Tosh catch up?

Unlike Seagate and WDC, Toshiba does not manufacture its own platters, buying them in from Showa-Denko instead. That company has recently revealed one detail of its 3.5-inch disk platter roadmap – a 1.5 to 1.8TB platter. 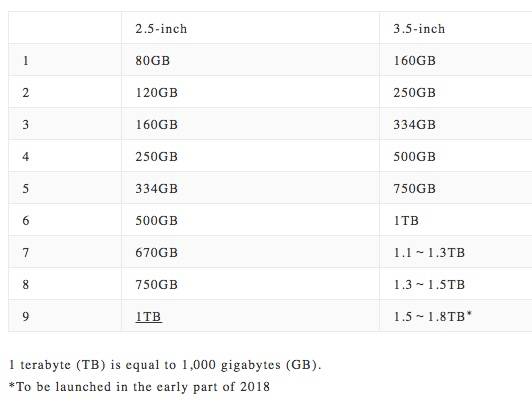 Toshiba's 10TB MG06 disk has seven platters and, effectively, a 1.43TB/platter areal density, which places it in the 1.3-1.5TB/platter area on the Showa-Denko table.

Assume a 1.8TB platter and a seven-platter drive would provide 12.6TB of capacity. That makes us fairly confident that Toshiba will introduce a 12TB air-filled disk drive next year.

We can go further. Toshiba has helium-filled disk drive technology on the way. That means it can introduce an extra platter into its 3.5-inch casing, meaning a 14.4TB capacity using Showa-Denko's components.

That would be without using WDC's host-managed SMR tech.

Unless WDC and Seagate get their in-house platter manufacturing to the same areal density level as Showa-Denko then Toshiba, a distant number three in 3.5-inch disk drive sales, could leapfrog them both in the capacity stakes – a quite unexpected possibility. ®