AMD comes out swinging, says: We're the Buster Douglas of the tech industry!

No you are not. You've been lucky MORE than once

Canalys Channels Forum Some metaphors do bear close examination. Just ask plucky, perennial underdog AMD, which this week compared itself to Buster Douglas, the short-lived heavyweight boxing champ who shocked the world when he dethroned Mike Tyson in the 1980s.

AMD was celebrating a win of sorts by convincing Lenovo to integrate its Ryzen and Epyc chips into the respective next-gen ThinkPad lappies and servers, and chose to do it in a novel – some might say cringeworthy – way.

John Hampton, worldwide director of commercial and client sales, put on a hooded silk gown emblazoned with the nickname Sir Hampton (different connotation in the UK) and ducked and dived his way to the front of the crowd to "Eye of the Tiger" (not Chumbawamba's famous chant: "I get knocked down but I get up again").

He went on to tell the crowd at the Canalys Channels Forum that AMD's share price had soared over the past 12 months (it is up by more than 90 per cent), that its CPUs had received rave reviews from critics, and its results were much improved compared to the darker days when AMD wrote off billions in inventory. 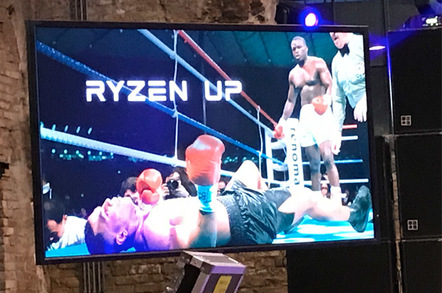 AMD helpers then ran a video showing Douglas fighting Tyson and getting floored in the fourth round, only to pull himself up before the bell and go on to become the first heavyweight to actually defeat Tyson in the tenth round. This was one of the biggest shocks in boxing history.

"Can you see where we are going with this?" Hampton asked. "Just like Buster Douglas, AMD got up again, we got back in the gym and kept swinging.

"The Street has embraced us, [so have] the customers and the channel," he added.

What the AMD exec didn't feel pressed to explain was that following his momentous win, Douglas went on to have one title defence fight over an eight-month space in which Evander Holyfield whooped his ass. Douglas then retired.

El Reg put this to Hampton. "I thought about that but unlike Buster Douglas we do have a roadmap that will sustain us. Is AMD going to be a one-hit wonder? No."

Healthy competition in the chip industry is good for everyone, even Intel – it helps to keep the monopoly's commission at bay... mostly.

Hampton assured us that "innovation at AMD will continue", though his sales pitch appeared, er, on the ropes and perhaps a little sluggish. ®