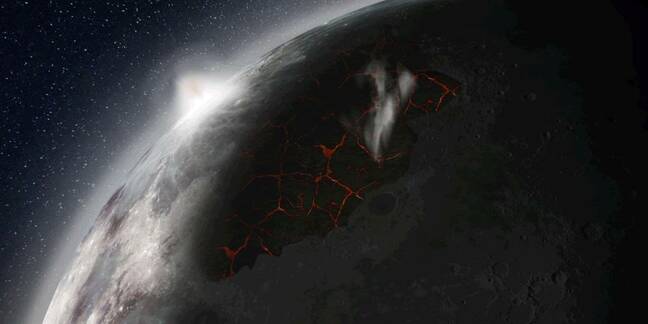 Our Moon had an atmosphere visible from space almost four billion years ago – thanks to volcanic eruptions on its surface spewing a concoction of gases at a rate faster than they could escape the heavenly body.

A NASA study published in Earth and Planetary Science Letters this week describes our ancient rocky companion in a very different state to what we can see today. Before it turned dusty and grey, it was covered with patches of magma that had bubbled to the surface and snaked over the surface for hundreds of kilometres.

The remains of these formations can still be seen. The dark layers of basalt that cover the crater-strewn surface mark where plumes of magma spewed forth from inside the Moon. Samples of this volcanic rock dust – the leftovers of these eruptions – were taken during the Apollo missions, and were found to contain evidence pointing to the presence of gasses including carbon dioxide, sulfur, and hydrogen as well as water vapor.

In other words, the magma hotspots spouted these gases, presumably forming a rather unpleasant atmosphere on our Moon and not too dissimilar to the atmosphere we imagine within Yahoo! this week.

Debra Needham, coauthor of the paper and a research scientist at NASA’s Marshall Space Flight Center, thinks this explains why water vapor was found at the lunar poles: it was dumped there by volcanic eruptions.

“The total amount of H2O released during the emplacement of the mare basalts is nearly twice the volume of water in Lake Tahoe [in California]. Although much of this vapor would have been lost to space, a significant fraction may have made its way to the lunar poles. This means some of the lunar polar volatiles we see at the lunar poles may have originated inside the Moon,” she said on Thursday.

David Kring, coauthor of the paper and senior scientist at NASA’s Lunar and Planetary Institute, added: "This work dramatically changes our view of the Moon from an airless rocky body to one that used to be surrounded by an atmosphere more prevalent than that surrounding Mars today. When the Moon had that atmosphere, it was nearly three times closer to Earth than it is today and would have appeared nearly three times larger in the sky.”

The Moon continues to be an area of intense study for America's space agency. On Thursday, US Vice President Mike Pence spoke at a National Space Council meeting, and announced his desire to see American astronauts return to the Moon in preparation for longer human spaceflight missions to Mars and beyond.

NASA’s administrator Robert Lightfood said the agency “has been directed to develop a plan for an innovative and sustainable program of exploration with commercial and international partners to enable human expansion across the solar system, returning humans to the Moon for long-term exploration and utilization, followed by human missions to Mars and other destinations.” ®

Guess what shrinks when it gets cold and then you shake it around a little? The Moon. We're talking about the Moon

What did you think we meant?