Boffins' bonkers fibre demo: 53 Tbps down ONE piece of glass

Japan's NICT looks to data centres of the future

If you've always wanted to pump more than 50 Tbps down a data centre fibre, good news: it can be done. The bad news is that right now, it needs a fair whack of boffinry and equipment.

To this, according to NICT, also needed a switch able to switch all seven cores of a fibre, simultaneously, with a switching speed of 80 nanoseconds.

For the test, the NICT boffins used three different fibre segments: a 28 km segment that had 19 cores available; a 10 km segment, also with 19 cores; and a 2km fibre with seven cores.

As the boffins' illustration below shows, addressing is pulled from the incoming signal and passed to the switch controller. 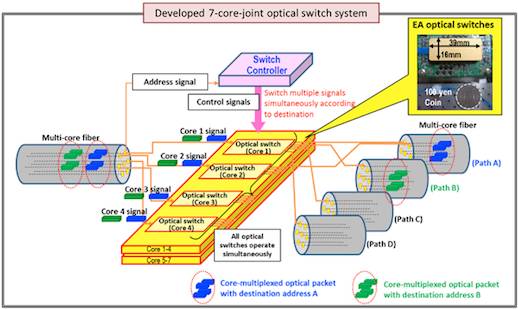 The researchers published their experiment as a post-deadline paper in late September's European Conference on Optical Communication in Gothenburg, Sweden. ®