They've only gone and made a chemical-threat-detecting ring

Oo, what's that you've got on? Chanel No. 5? Anthrax? This trendy wearable would know

Smartwatches and Fitbits might be the cool wearables du jour, but they're hardly able to tell you if you're standing in a cloud of noxious chemicals. However, a team of boffins hopes to some day fill this, er, gap in the market with their hip prototype, the broad goal of which is to help keep you alive.

"Most wearable [devices] measure vital signs for sport or health," Wang, a nanoengineer, told The Register. He and his lab decided that since these were so proving so trendy, they might as well add biohazards to the list.

Researchers have created a variety of chemical sensing technologies in the past and even designed ring-shaped devices for tracking pulses. Wang's lab has worked on several other threat detectors, including gloves. The new ring design can detect concentrations of nitroaromatic and peroxide explosives as well as organophosphate nerve agents, at least according to Wang's team.

Inside the 28×27×12 mm3 3D-printed case is a 15x15 mm2 electronic board with a stamp-sized potentiostat, which records telltale changes in electrical currents that flow between electrodes. It's powered by a rechargable Lithium ion 3.6V coin battery that lasts for about 7.5 hours of continuous use.

When vapours diffuse through a semisolid hydrogel cover, the board senses them. It sends electrical signals to a laptop computer via Bluetooth Low Energy.

After some electrochemical analysis, the researchers saw electrical activity change based on threat concentration. They could detect 5, 50, and 100mg concentrations of 2,4-dinitrotoluene (DNT) powder turned vapour and vapours produced from 2.5, 5, and 10 per cent 2mL concentration of aqueous H2O2 solution inside a 9.1cm diameter, 9.6cm tall glass vial by securing the ring sensor in a fitted gap in the lid. They could also detect 5 to 15mM concentration methyl paraxon (MPOx) they sprayed 5 cm away from the sensor surface for 15 seconds. 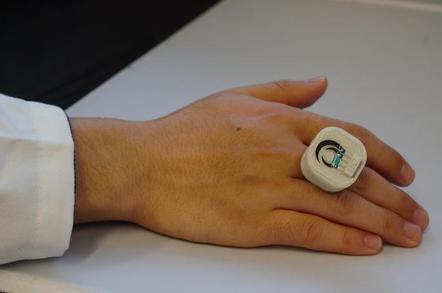 You might wonder if such a ring is worthwhile considering that by the time it detected such close threats (range for vapours depends on how they move through air), you might have moved away from the source or your health would already be in danger. It's "never too late," Wang said, because you could get "rapid warning and detoxification".

The work was supported in part by the US Defense Threat Reduction Agency Joint Science and Technology Office for Chemical and Biological Defense.

Several scientists not involved in the research that spoke to The Reg expressed scepticism to this approach, which Wang said could be expanded to support other chemical threats than just the few published here.

There would be the – um – practical concerns of convincing people to slip this science lab on their fingers, some say.

But added: "I do not think any hazmat or soldier would wear [a detector] as a ring" because it's "not convenient".

"The same tech would be better [as] part of the texture of their clothes," he said.

Raz Jelinek, also at Ben-Gurion, told The Reg that the sensor was "quite remarkable" because it can communicate wirelessly and handle more than one threat. It looks still "too bulky" as a ring but the sensitivity is relatively high given the compact size, he said.

But he added: "I am not sure whether the system will perform well and [with] high fidelity over long time periods." He had some technical concerns regarding its "stability, reproducibility, and fidelity".

According to the paper, stability was "excellent" but experiments were mostly conducted for less than two hours. The researchers did discover that after three hours in open air, for example, the agarose gel dried and altered signals.

Wang said he intends to pursue commercialisation so perhaps one day a version of this gadget will wind up as part of a wedding proposal.

Wang added that it will also detect perfume. ®