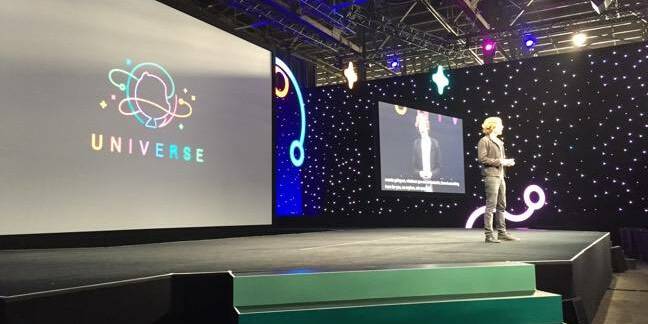 At Pier 70 in San Francisco, California, on Wednesday, where ships once were built, code-hosting biz GitHub held forth on building and shipping code, and on the people who do so.

"What is a social network with no one on it?" mused Wanstrath, missing the opportunity to answer, "Friendster."

The obligatory metrics disclosure followed: 67 million repos on GitHub, 53 million monthly visitors, and so on.

Beyond the reassurance value for community members, Wanstrath's data dump served as a setup for Miju Han, engineering manager on the data science team at GitHub.

"We think the future of coding is no coding at all," Wanstrath subsequently explained, though he later allowed there might be some.

People write less code now than they once did due because so much functionality comes from libraries, Wanstrath said. And he expects people will write even less code in the years ahead as automation, machine learning and community expansion efforts make development more mechanized and more accessible to a broader audience.

"The next phase of our product and the next phase of software development in general is turning [GitHub's knowledge of developers and their code repos] into useful data," said Han.

That sentiment takes the form of GitHub's new dependency graph, which displays packages and applications linked to a specific repository.

Initially available for JavaScript and Ruby, with Python support coming shortly, the dependency graph will soon be augmented with security alerts to inform developers when their code relies on a package with a known vulnerability. In some cases, it will suggest a fix.

GitHub is also revising its news feed to expose developers to code projects deemed interesting through data crunching. Users can expect personally-tailored recommendations, based on people they follow, repos they've starred, and popular trends, in the "discover repositories" feed on their dashboard.

"It's not actually magic, it's machine learning," Han reassured.

Dismissing recommendations will scold the machine to learn better, so it shows less unwelcome info in future.

GitHub also announced a redesigned explore tab, its curated collection of potentially interesting topics, and premium support for GitHub Enterprise customers. Also, the site is launching the GitHub Community Forum at the end of the month.

Wanstrath suggested that coding, which has been likened to standing on the shoulders of giants, will become more like standing on each other's shoulders.

The Register is still trying to figure out how that will work. In the meantime, here's a summary of today's announcements to check out. ®