See this IMAP, Zuck? It's pointing right at you 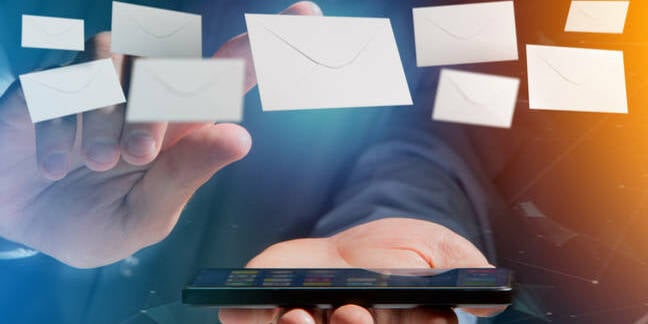 Exclusive The company that writes the open-source software for three-quarters of the world's Internet Message Access Protocol (IMAP) email servers has a plan that could kill off proprietary chat services like Facebook's WhatsApp. And that means you, too, Slack.

German open-source software-as-a-service operation Open-Xchange acquired the IMAP developer Dovecot three years ago, and announced today at the OX Summit in Brussels that it wants to integrate chat into the bundle.

Dovecot co-founder Timo Sirainen told us plans were in their early stages. The team hadn't decided which protocol to use. But the goal was to make it so easy that existing IMAP installations would find it trivially easy to turn it on.

Open-Xchange co-founder and CEO Rafe Laguna, who has long railed against the dominance of closed-source internet platforms, said he was frustrated by having a dozen chat apps on his phone that put data into silos.

The goal is that the user could flit from IM to email and back again, and the integration would ensure that chat conversations were archived and searchable. That removes the need for a Slack.

"The main idea is that there are lot of Dovecot installations all over the world," Sirainen told us this morning in Brussels. "If we include chat in Dovecot, we can utilise them to create a distributed chat system.

"Even if you don't have the chat enabled it would still fall back to email, when, say, you weren't using the same chat client as me.

"Who would want to join a new chat network? Well, if it's easy to enable, we could enable the problem of people using it. Also even if you don't have the chat enabled it would still fall back to email... If you weren't using mine."

Slack marketed itself as the cure for office email but users pay a steep price for what's essentially a wrapper around Internet Relay Chat (IRC). Among Sirainen's first projects was an open-source IRC client.

"We think it should be really easy to enable. It should work through an existing port – if we use the same port as IMAP then usually that's open on firewalls."

The IMAP-chat work would be proposed as a standard and open-source code. "We do want other people to implement the standard. It should be a fully open chat system that anyone can join and reimplement the whole thing.

"We have this idea of easily, when you reply, seeing their online status, and chat instead, then switch back to email. You could still have the same chat messages and have them in the email. And you could still have your old email client that doesn't know about chat – but still see them archived as normal email messages – say, one per conversation."

Twenty years ago, most internet communication was conducted over open protocols, but now much takes place over proprietary networks like Facebook or Slack. Innovating in communications might not bring down Facebook's empire overnight – The Social Network operates two giant chat services, WhatsApp and Facebook Messenger – but it would make third-party alternatives more attractive and give users one less reason to stay logged onto the data harvester. ®