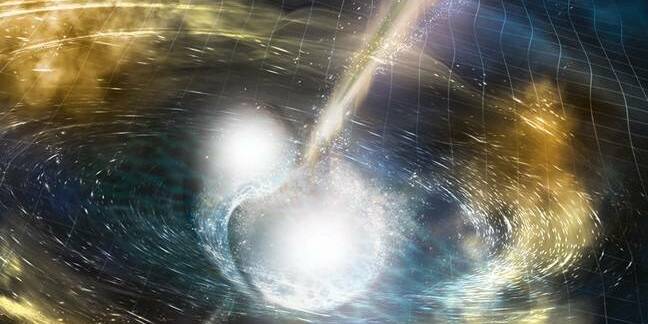 Barely two years after it came online, the Laser Interferometer Gravitational-Wave Observatory (LIGO) has scored a double success. Last week, the instrument earned its creators a Nobel Prize – and this week we're told it helped spot the first neutron star collision from both its gravitational wave and radiation emissions.

At 0841 ET (1241 UTC) on August 17, LIGO picked up the longest gravitational wave signal detected to date, named GW170817, and a short gamma ray burst. At the time, scientists couldn't be sure but the data suggested two neutron stars has smashed into each other. After poring over these readings from the LIGO equipment, astronomers today said they were able to pinpoint where the incredible explosion occurred, and orientated their telescopes to get a good look at what happened.

Sure enough, 130 million light years away, there it was in the galaxy NGC 4993: two neutron stars, caught in a death spiral, slammed into each other, triggering what was detected by LIGO on Earth as a 100-second long gravitational wave, a two-second flash of gamma radiation, and in the days and weeks after the impact, other electromagnetic radiation — including X-ray, ultraviolet, optical, infrared and radio waves.

In other words, on Earth LIGO picked up a long grav wave, and gamma ray emission, boffins used this to triangulate where in the heavens the signals came from, and clocked the stellar crash on their telescopes. Here's a video, from the Georgia Institute of Technology in the USA, illustrating the merger of the two neutron stars:

"Mergers of double neutron stars were predicted over many decades to drive such powerful explosions, but this multi-messenger discovery brings two key pieces of the puzzle together for the first time," said Vicky Kalogera, the leading astrophysicist in the LIGO Scientific Collaboration and ids based at Northwestern University in Illinois.

"Our discovery confirms a lot of our theoretical predictions, including that double neutron stars give rise to gamma rays, optical, infrared, X-rays and radio waves. At the same time, there are hints in these observations that are providing new mysteries we still need to understand."

The collision also helped determine where the universe's heavy elements come from. By monitoring the emissions of the impact, spectrographic readings showed large amounts of gold and platinum were produced in the merger of the incredibly dense binary stars.

"We've shown that the heaviest elements in the periodic table, whose origin was shrouded in mystery until today are made in the mergers of neutron stars," said Edo Berger from the Harvard-Smithsonian Center for Astrophysics. "Each merger can produce more than an Earth's mass of precious metals like gold and platinum and many of the rare elements found in our cellphones."

It's humbling to realize that the material in your wedding ring or catalytic converter came to Earth from stellar collisions eons ago spreading heavy elements across the universe.

"Our background analysis showed an event of this strength happens less than once in 80,000 years by random coincidence, so we recognized this right away as a very confident detection and a remarkably nearby source," added Laura Cadonati, professor of physics at Georgia Tech and deputy spokesperson for the LIGO Scientific Collaboration.

"This detection has genuinely opened the doors to a new way of doing astrophysics. I expect it will be remembered as one of the most studied astrophysical events in history." ®

Hidden wonders of the universe