Rubrik has new competition in the space

Commvault is launching a HyperScale all-in-one appliance providing a scale-out platform for its data protection and management services, taking on competing offerings from the likes of Rubrik and Cohesity.

Company CEO, chairman and president Bob Hammer said there is a concerted and ongoing move to scale-out cloud-like infrastructure in enterprise data centres and this will become the dominant architecture. All-in-one or hyper-converged appliances are easier for customers to deal with than multiple platform components, and suppliers will move to service-level agreement outcome-based technology as cloud-style computing ideas take hold. 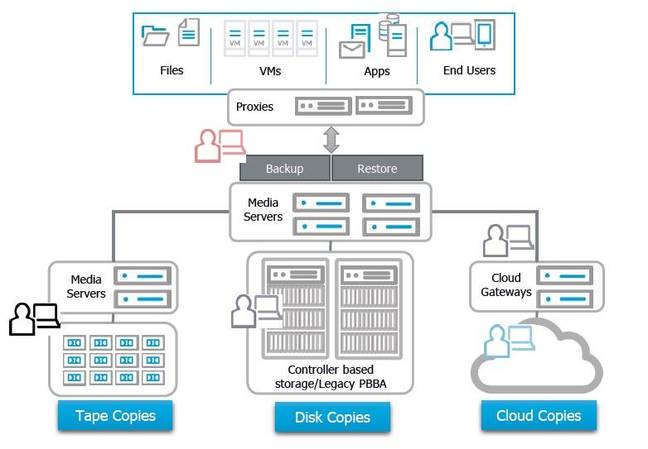 This runs in the data centre, and also in remote and branch offices. It is cloud-like in operation and use, and also bridges to the public cloud, primarily using it as another tier of storage for the overall secondary storage pool provided by the appliance.

Commvault says the appliance integrate with storage arrays, hypervisors, applications and the full range of cloud provider offerings. Hammer told us; "It's a state of the art appliance with more functionality at lower cost than the competition. ... it's the real deal," and should interest both enterprises and managed service providers (MSPs). 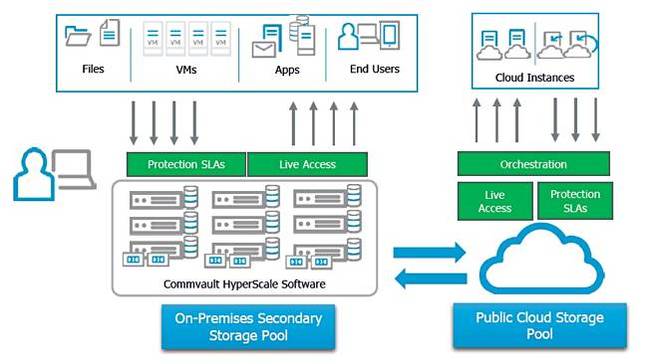 The competition referred to is twofold; scale-up systems from Data Domain and others, and scale-out systems from Rubrik and Cohesity.

The system has high availability and disaster recovery capabilities. It is sold on a subscription basis with support and hardware refresh - next-generation refresh every three years - supplied over the lifetime of the appliance’s deployment.

The mimimum configuration is three nodes. The disk drive capacities are 4, 6, 8 or 10TB in size and there are four 3-node configurations:

Some 33 per cent of raw capacity is used up by the erasure coding.

These nodes can be scaled out in a Gluster grid to 20 - 30 usable PB of capacity, meaning racks of appliance nodes, think up to 128 nodes. Multiple grids can be managed from one central console.

There is a software-only version for running on a customer's own hardware which meets a validated reference design. Included suppliers are Fujitsu, Cisco, Lenovo, HPE, Super Micro Computer, Huawei and Dell-EMC.

This software could run in the public cloud but that is not CommVault's marketing intention, with Hammer saying: "It's not a core component of how we're going to market with this [appliance]."

When the cloud is used as a storage tier, then, because of the way objects are stored, Commvault says the appliance enables cloud compute.

We understand machine learning technology is being developed to fight ransomware and other malware infestation attacks.

Commvault's HyperScale Software and HyperScale Appliance are available directly through Commvault or through its channel.

It sees scale-out data protection and management competition from suppliers like Rubrik and also Cohesity.

Commvault's chief communications officer Bill Wohl said that part of the Rubrik/Cohesity appeal was simplicity, but maintained: "If you want to serve the enterprise you must be comprehensive, and not limit customers.

"And for their claims that we are complex, our new user interface means those issues are way behind us now (note our achievements in both the Gartner MQ and the Forrester Wave where our user interface plus powerful orchestration were strengths)."

Wohl claims his firm's appliance supports features that enterprises need and which he claims its newer competitors lack, including:

Hammer said: "Rubrik's moment in the sun – when they had no competition – is now over, with the launch of Commvault HyperScale."

Rubrik co-founder and CEO Bipul Sinha responded: "I see that Commvault has recognized Rubrik as a serious disruptor in the data management market including backup/recovery/DR/archive on premises as well as in the cloud. We are rip-and-replacing Commvault in the largest of the enterprises regularly and doing numerous multimillion-dollar deals.

"Their nervousness shows when Bob is making a statement such as 'Rubrik's day in the sun is over...' and singling Rubrik out as their main competition.

"As far as their new offering is concerned, this is again a legacy architecture with Commvault's 20+ year old software and Red Hat distributed storage(Gluster open source storage software) put together in a Commvault branded box. This is no differnt that Commvault + Isilon distributed storage (that they sell today) in a box. You might reckon that Rubrik has a converged architecture with a single software that does all the functions and scales-out natively and infinitely. Commvault's new offering is essentially an old wine in a new bottle all over again and haven't we seen this kind of a response from a legacy incumbent against a fast growing upstart that is disrupting legacy vendor's business." ®

Veeam: Users are crying out for cloud tiers

Signs up NetApp as a reseller

The future is cloudy...