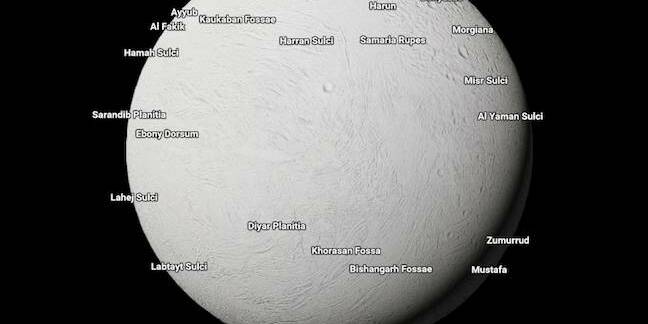 Can't tell the difference between a photo of your partner and one of your pet? Good news, Google can now automatically sort photos of animals from pics of people.

In this pun-peppered post (“oppawtunity”? “pawesome movie”? Save us) explains that instead of asking Google Photos for “dog” or “cat”, the software will now do the sorting for you, so you can set to the work tagging.

Which has landed somewhat better than what was meant to be officially Even More Awesome™: a bunch of new planets and moons added to Google Maps.

It actually is awesome, at least a little: from the roughly half-a-million images collected by the celebrated spacecraft Cassini, Google has stitched together flyovers of places on the now-lamented probe:

Explore the icy plains of Enceladus, where Cassini discovered water beneath the moon's crust—suggesting signs of life. Peer beneath the thick clouds of Titan to see methane lakes. Inspect the massive crater of Mimas—while it might seem like a sci-fi look-a-like, it is a moon, not a space station.

Only … among all that effort, the Chocolate Factory hasn't always noticed whether or not it got the photo the right way up / round.

As planetary scientist – and senior editor and planetary evangelist for The Planetary Society – Emily Lakdawalla Tweeted:

Anybody know who I should talk to at @Google to let them know that several of the icy moon maps have names & image offset by 180 degrees?

Google's set to get to work, though, so it might be a good idea to screen-cap the mistakes in case, like flawed stamps, they're worth something one day:

Thanks for the heads up! Sent along to the team, will look into fixing.

I'm in contact with a Googler about the problem maps, which include Ganymede, Mimas, Enceladus, Dione, Rhea, Iapetus, Europa, and Titan.

Hooray! If anybody needs any assistance, I stand ready. Maps can be downloaded here for cross-checking: https://t.co/dJCInd3PYA

I think something's weird on Mars, or at least, the label for Valles Marineris is far northeast from where I'd put it. pic.twitter.com/wACME4AnMM