Facebook, Google and pals may be hit with TV political ads rules 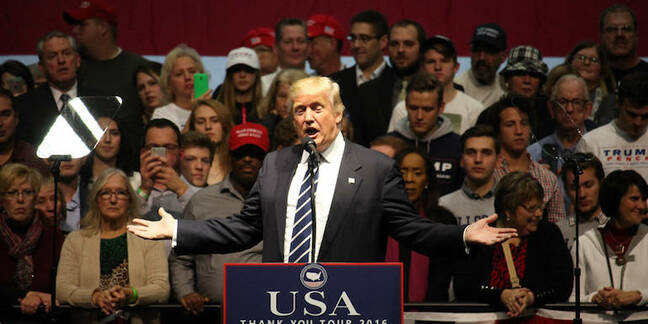 Facebook and Google, along with other online publishers, may soon be required in the US to disclose funding for paid political ads.

On Thursday in Washington DC, two US senators – Amy Klobuchar (D-MN) and Mark Warner (D-VA) – proposed a bill called The Honest Ads Act to extend the funding disclosure requirements for political ads on TV, radio, and in print, to online ads.

Under these disclosure requirements, traditional media has to produce and reveal lists identifying organizations that have bought political adverts. If the Honest Ads Act is passed into law, top online sites, from Facebook to Twitter, will fall under these requirements, too.

The bill, cosponsored by Senator John McCain (R-AZ), essentially represents an attempt to respond to Russian efforts to influence the 2016 Presidential Election through social media.

"We understand that election security is national security," said Klobuchar in a webcast news conference. "And we know that Russian threats to our national security do not always involve traditional weapons of war."

Similar legislation is expected to be introduced in the US House of Representatives on Thursday by Reps. Derek Kilmer (D-WA) and Mike Coffman (R-CO).

Facebook, Google, and Twitter have all said they sold politically-oriented ads to accounts linked to Russia. Facebook has characterized the ads it sold as "amplifying divisive social and political messages."

The political persuasion emanating from Russia has played out alongside efforts by hackers to penetrate the voting systems in 21 US states, which election officials have linked to "Russian government cyber actors."

Noting that the next set of elections in America is only 383 days away, Klobuchar said, "Russia will keep trying to divide our country."

Klobuchar said Americans deserve to know who's paying for political ads and US laws need to be updated to deal with the now significant role social media plays in politics.

Warner echoed that sentiment. "We need to acknowledge the fact that the nature of politics and campaigning is changing," he said. "More and more, we turn to these online platform to receive our news."

Warner said foreign agents used American social media to sow chaos and discord, and he expects the paid ads disclosed so far represent the tip of the iceberg.

If the bill is approved by Congress and signed by the President, the Bipartisan Campaign Reform Act of 2002's definition of election-oriented communication would be extended to include paid internet and digital ads.

In addition, the rules would require digital platforms averaging 50 million monthly viewers to maintain a public list of political ads purchased by a person or organization spending more than $500 cumulatively on such ads, on a per-platform basis.

And it would direct digital platforms to make "all reasonable efforts" – a rather unambitious standard if national security is at stake – to prevent foreign individuals and organizations from purchasing domestic political ads.

The bill could be easily be called the Facebook and Google Act, since those two companies accounted for about 85 per cent of online political ads, according to Klobuchar.

Given the ease with which fake online accounts can be created and ad budgets can be programmatically held below $500, it's hard to believe the proposed rules will withstand efforts to bypass them. But they represent a step toward greater election transparency.

A congressional hearing on the issue, at which executives from Facebook, Google, and Twitter are expected to testify, is scheduled for November 1, 2017. ®

PS: Investigative journalists in Russia this week published claims that pro-Kremlin Russian internet trolls blew $2.3m on interfering with the 2016 US elections, tricked 90 American activists into organizing protests and disinformation campaigns in the States, and reaching tens of millions of people via social media.