For now, consider the new Surface Book 2 with mere 17-hour life and Intels inside 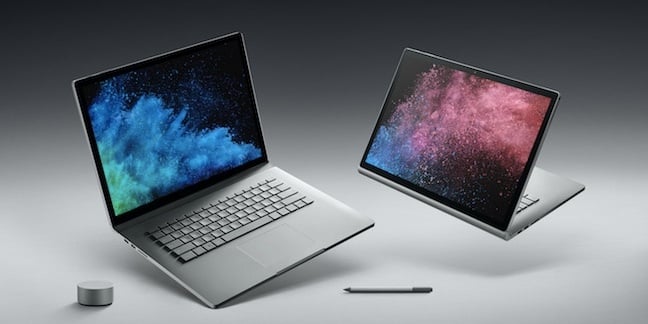 Microsoft says testing of Qualcomm-powered laptops running Windows 10 is well advanced and suggest it will be possible to use the devices for multiple days without charging their batteries.

Qualcomm revealed its tie-up with Microsoft in December 2016, when it promised Windows-10-ready 64-bit ARMv8-compatible Snapdragon system-on-chips would be ready in the second half of 2017.

News from Qualcomm's 4G/5G Summit in Hong Kong this week suggest that deadline could be met. Trusted Reviews reports that Microsoft's principal group program manager for connectivity partners Pete Bernard told media at the event that hundred of Qualcomm-powered lappies can be seen in the halls at Microsoft HQ. Bernard also said that the machines are doing better than expected in terms of battery life as he now happily leaves his charger behind, safe in the knowledge he won't need it every day.

Other reports from the Summit have Bernard saying testing of Qualcomm-powered Windows 10 machines is very advanced.

A pre-Christmas debut would set the cat among the pigeons, but sadly that “second half of 2017” deadline was for silicon, not finished product.

If you can't wait to see what Redmond and Qualcomm have cooked up, Microsoft's also announced the new Surface Book 2.

Prices start at US$1,499 for the 13.5-inch machine with minimum specs. The fully-tricked-out 15-incher costs $3,299. Those prices exclude a Surface Pen or Microsoft's Dial, which works with these new machines.

Both machines claim “ Up to 17 hours of video playback” in tests during which Microsoft says “All settings were default except: Wi-Fi was associated with a network and Auto-Brightness disabled.”

Full details of the products can be found here. Microsoft's made much of the new laptops' superior specs when compared to Apple's MacBook Pro. The devices' physical dimensions are closer to the Macbook Air.

The Register has recently reported Microsoft's channel and partners death-riding the Surface range, because it's not good for their businesses.

Perhaps Qualcomm-powered laptops will be more welcome: Bernard reportedly said OEMs beyond currently-signed-up Asus, HP and Lenovo are keenly aware of and interested in the new ARM-powered machines. ®