The case of the disappearing insect. Boffin tells Reg: We don't know why... but we must act

'It's more dramatic than climate change' 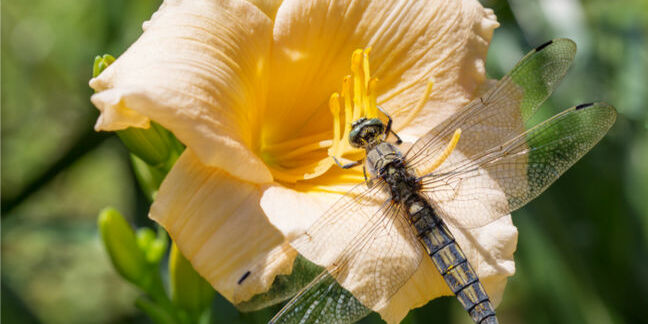 "Insects are at the bottom of the ecosystem," the lead author of a study into a massive decrease in collected insects told The Reg. Their loss, he added, is "likely to collapse the entire pyramid".

Between 1989 and 2016, boffins used nets to fill about 1,500 one-litre bottles with flying insects from 63 conservation sites in Germany. Every week in 1989, they collected about 50 grams of the critters, but in a week today, they get only about 10 grams.

A new study in PLOS One has found that between 1989 and 2016, for reasons that are unclear, the total biological mass of insects collected at these "protected" nature sites has fallen about 76 per cent, considering changes in seasons and climate. Flying insects make up over 90 per cent of the roughly 33,000 insect species in Germany.

The paper, "More than 75 percent decline over 27 years in total flying insect biomass in protected areas", can be found here.

"The insects are just slipping through our hands," lead author Caspar Hallmann of Radboud University at Nijmegen in the Netherlands told The Register.

To a short-lived insect, these long-term trends might seem invisible, but "many people do not realize how important [insects]" are. They're responsible for recycling important nutrients in the atmosphere, pollinating flowers or feeding amphibians, mammals and birds, he told us.

Part of a trend

Numerous studies have shown a worldwide decline in individual species of insect, such as bees or European grassland butterflies. The new study is one of the largest in scope, however, because the researchers collected a wide variety of species – and the high loss adds more evidence that it isn't a species-specific effect.

The landscapes examined were both nutrient-poor and nutrient-rich sites including grasslands, shrubs and wastelands. Using statistical analysis, the researchers determined that changes in habitat, weather and land use cannot account for the fall.

Dr J Wolfgang Wägele, director of the Zoological Research Museum Alexander Koenig in Bonn, Germany, was not involved in the study but is working with some of the authors to help identify the individual species affected.

"What's really frightening," he told The Register, "is that so many species have declined in number". He said the trend is probably similar elsewhere in the world.

"It's more dramatic than climate change," he said. "You cannot build a new species."

But, at the same time, there might still be hope. This ecological loss might be revertible if the cause is addressed, according to the scientists.

Hallmann said his team was investigating the causes and effects of the flying insect decline, but there are a couple of standard theories about why this is. Other studies suggest that the likeliest would be more intensive agricultural practices – increased use of toxic pesticides and extra mowing or fertilizer affecting vegetation.

He cautioned that it's not clear yet that you can deduce one cause for sure. "At this point, it's all speculation," he said.

However, he recommends people "reconsider" the use of landscapes, perhaps by making nature conservation sites larger, reducing agricultural practices around them or increasing vegetation such as flowers. "I don't think we have the time to sit and analyze," he said.

Wägele believes that likeliest cause is the agricultural industry's increasing use of harmful pesticides. He said there is no law in Germany prohibiting their use next to nature reserves.

He is calling for more restrictive limits on pesticide use and additional conservation of vegetation. The big problem, he said, is that farmers need to make a living.

"We need to talk about how much we pay for food," he said. For example, in a landscape east of Berlin, Brodowin, large-scale organic farming without pesticides has evidently led to positive conservation efforts for breeding bird species compared to a non-conserved landscape in east Germany.

But that organic fruit or vegetable at Whole Foods would likely be more expensive than one at Sainsbury's – crop yields are far lower.

"We expect that already one year after giving up the use of pesticides the number of insects will increase," Wägele said. It might take "several years" for some species, however, as they might need to migrate back from remote areas to which they had escaped for survival, or specific food plants or sites for breeding might need to be revived for them.

"Insects are quite resilient," Hallmann said. ®