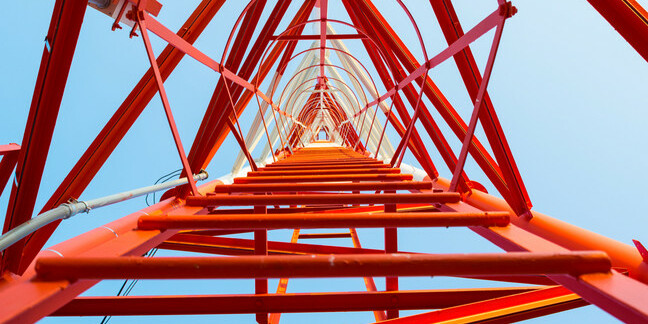 Britain's biggest mast outfit, Arqiva, has confirmed it will float on the London Stock Exchange next month, a move it hopes will raise £1.5bn and reduce its debt.

The private equity owned business is a dominant player in Blighty's infrastructure and communications landscape. Some 19 million homes are connected via its 1,500 TV and radio terrestrial transmission and broadcasting sites and 8,000 wireless towers.

Based in Crawley, Hampshire, the biz's roots go back to 1922 when the BBC made its first radio broadcast.

Arqiva hopes to raise £1.5bn by selling at least 25 per cent of its shares, on a £6bn listing.

Philip Carse, analyst at Megabuyte, said: "The primary objective of the IPO seems to be to tidy up a balance sheet weighed down by debt, shareholder loan notes and swap liabilities."

Carse noted that last year the company's net debt position increased from £4.2bn to £5.2bn, of which £2.15bn was shareholder loan notes.

He said: "When the owners bought the business in the noughties, and loaded it with quite a lot of debt... since then the business has consumed cash every year, partly because of the interest but also high levels of capital expenditure due to network investments.

"It's also because the shareholders have loan notes in the business; the loan notes attract interests at a high rate." Under an IPO, those loan notes will be written off, he said."

In July 2017, the business bought Luminet’s London 28GHz licence for an undisclosed sum. Last September it flogged off its Wi-Fi business to Virgin Media for £23.6m.

"We are very much looking forward to bringing our unique combination of leading assets and skills to the public markets." ®

So much for the shift to streaming... for now