A week in WANdisco, Toshiba 'n' pals, plus storage-iest bits of Microsoft and mates

Another week has passed by, and yet another torrent of storage news streams towards us, running the gamut from spin-transfer torque magneto-resistive RAM to data streaming and a Maltese Smart Island hub.

This backup and blockchain-focused data protection company is opening a new European Technology Hub in the Mediterranean island of Malta, hoping to help it become a "Smart Island". It is being done in collaboration with Runa Capital and Parallels.

Both Parallels and Acronis are owned or run or chaired by Serguei Beloussov. He is also one of global technology-focused venture capital firm Runa Capital's co-founders.

Dr Joseph Muscat, prime minister of Malta, said: “We are happy that another global investor chose Malta to expand its operations in Europe. There is one added crucial factor that brings us here together today. We share the same vision for Malta – that of becoming a hub for technological innovation.”

It says FileCloud offers branding and customization tools, allowing you to set your own policies, and design your own emails and broadcast alerts. Customized emails and UX significantly reduce spoofing risk as hackers can’t run a mass spoofing unless they have an exact copy of an email from one of your employees, it claims.

The new product has granular controlled folder access, a real-time content / behavior heuristic engine, and unlimited versioning and backup to rollback. FileCloud says it can roll back not only employee files but also entire server files to any specific date and time before the attack.

Microsoft removed Storage Spaces support from a Windows 2016 preview build, v1709. Asked about this, a company spokesbod said: "Storage Spaces Direct was introduced in Windows Server 2016 and remains the foundation for our hyper-converged story. Following our successful Windows Server 2016 release, we’ve listened to our customers and are already working to deliver the next set of innovation to our hyper-converged story.

"We elected to keep these features in preview, for the Windows Server, version 1709 train. There will be another train available soon, as the new Semi-Annual Channel release provides a more rapid release cadence for greater flexibility and faster innovation for our customers."

Will Storage Spaces Direct support come back? Guess we'll have to wait for the next Windows Server 2016 preview train. Stay on the platform and wait six months.

There are two add-on modules or packs.

The Scale & Availability Pack offers functionality including clustering, fan-out, and persistence – focused on addressing the challenges of resilience, geo-dispersement of data, and scaling to large audiences.

An updated version of SME's enterprise File Fabric product has enhanced governance and compliance to support new compliance regimes such as GDPR, support for more data repositories via the introduction of new connectors and new multi-cloud collaboration features which work across on-premises and on-cloud files and data.

The File Fabric unifies all on-premises and on-cloud data into a single workspace for end users.

STT will contribute its high-speed, high-endurance pMTJ design and processing technology; TEL will utilise its ST-MRAM deposition tool and knowledge of unique formation capabilities of magnetic films. The companies will demonstrate sub-30nm pMTJ’s, 40 to 50 per cent smaller than other commercial products.

Sysdig, a startup with container intelligence software that monitors and secures containers, has completed a $25mn series C financing round through Accel Partners. It has launched a Sysdig Secure product to offer run-time security and forensics for containerized environments based on Docker, Kubernetes, OpenShift, Amazon ECS, and others. 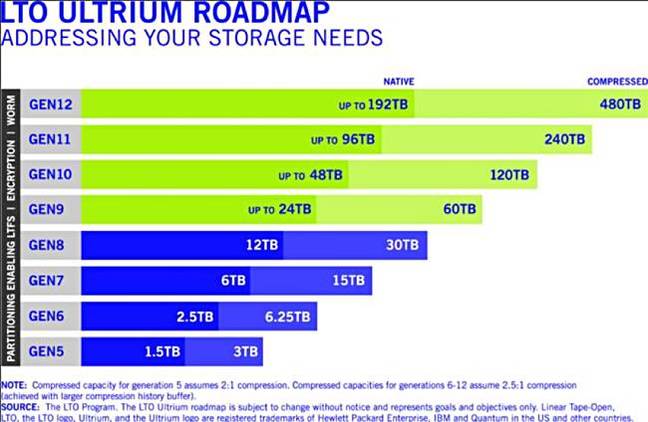 LTO-8 also includes a new format feature that allows customers to increase the capacity of the latest LTO-7 cartridges by up to 50 per cent to store 22.5 TB of compressed data. This is done by having new LTO-7 cartridges initialized as LTO-8 Type M media.

LTO-8 is only backwards-compatible with LTO-7 format tapes.

Earlier this week Quantum announced that LTO-8 drives will be available in its Scalar tape libraries and StorNext AEL archive systems from December.

The data warehousing/BI whiz says it has a strategic partnership with GE Aviation focused on providing analytics for the world’s airlines.

It combines operations, assets and networks from GE Aviation with Teradata’s customer information, sales and marketing, and back-office support.

Potential benefits could relate to, for example,flight disruptions. These, the two say, could be be actively managed by GE with customer experience being managed by Teradata. With the combined offering, the process to manage disruptions is improved by adding information about managing parts inventories, logistics, scheduling, and labour pools.

Countering reports that Toshiba's flash wafer production had been severely impacted by malware again, a company spokesperson said: "Beginning in September of 2017, viruses were detected in some locations within the Toshiba Group of companies. We cannot share details or comment on the specific locations that were affected, but can confirm that the virus did not spread outside of the Toshiba Group network. Currently, normal operations have been restored at all affected locations.

"Any customers that may have been impacted by the situation have already been notified, and reassured that operations have resumed as normal."

We asked Vexata to confirm that its VX-100M array's 7 million IOPS with a 40μs response time is an inside-the box response time.

That is a lot of steps/hops. Does this mean that the latency Vexata is quoting is inside the box only, and not what an application actually sees when you add in the network and host stacks?

Vexata's CTO, Surya Varanasi, said: "Yes – the latency inside the box is 40μs when the Optane SSD is used.

"Application latencies will include host and switch latencies. We have characterized the end to end path from the host all the way down to the storage. Host latencies tend to be in the ~75μs range. Network switches are very low latencies and in the range of ~1-2μs.

"We have characterized end to end IO latency from the server to the VX-100M to be around ~130μs."

Virtual Instruments has added support for NetFlow IP network monitoring and the SMB protocol to the VirtualWisdom NAS Performance Probe.

This is a hyper-converged infrastructure appliance software provider. It has announced the availability of persistent Virtuozzo Storage for Kubernetes (K8s); software to run on commodity hardware.

It adds to to its existing offering for Docker containers, which received Docker EE certification in June.

Replicator WANdisco says its Fusion product is integrated with Microsoft Azure Data Box. Microsoft customers can use it and Azure Data Box to transfer information from Big Data applications to Azure without the downtime and cost usually involved in bulk data transfer over the network.

Users can continue to write to their local cluster while Azure Data Box is in transit and subsequently being uploaded, and replicate those changes to the Azure Cloud with guaranteed consistency once the upload is complete.

They can write data to a local HDFS-compatible endpoint on-premises and replicate to a storage location in Microsoft Azure with no modification or disruption to applications operating in Hadoop clusters on-premises.

It's a multi-cloud world for WANdisco, and why not? ®