Robot arm to penetrate surface, get alien world's rocks off for analysis

Pics After an extensive summer of long, long, long-distance remote support by NASA engineers on Earth, it looks as though Curiosity on Mars is back in the drilling game.

At the end of 2016, the rover's drill bit, which it has used more than a dozen times to explore the bedrock of the Red Planet, started playing up. The problem was with the drill's feed mechanism, which pushes the bit out of its housing and down into the surface: it simply stopped working properly.

In normal operation, the drilling unit is lowered down to the surface with stabilizing bars on each side. Once the rig is firmly seated on the ground, the spinning drill bit is extended down by the feed mechanism and into the Martian rock below, pulverizing the material for on-the-spot analysis. The stabilizers and the feeder ensure the bit hits the surface at the right angle so that it isn't damaged or gets stuck.

When the feed mechanism started malfunctioning, the NASA team had a rethink, and over the summer this year realized it had to guide in the bit using the robot's arm, which the drilling unit is attached to. Rather than setting the rig down on the ground, and extending the bit down the final short distance, NASA boffins decided it would be best to have the robotic arm move the bit to the right spot and push it down into the surface, just like a person drilling a hole in a wall by hand ... or extending a middle finger down to the ground. 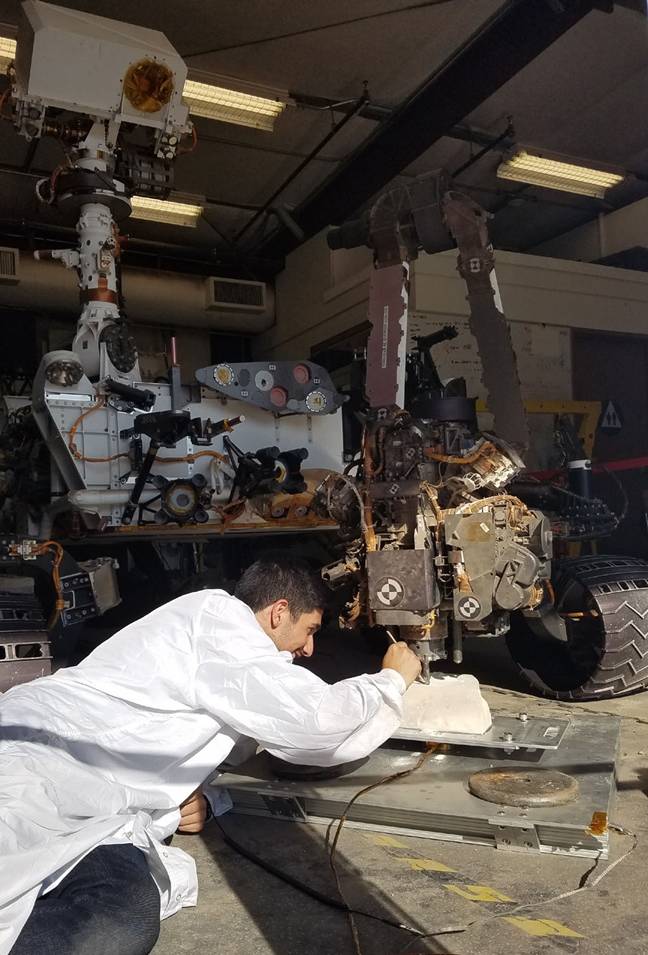 On October 17, NASA scientists gave the technique its first test. They pushed the drill bit to the Martian surface using the arm, and checked the sensors on the arm to measure any sideways movement of the drill. This feedback is crucial, because you don't want to knacker the drill by making it slip and flail around. This machine is about 55 million kilometres away, after all, and a repair callout is out of the question.

"This is the first time we've ever placed the drill bit directly on a Martian rock without stabilizers," said JPL's Douglas Klein, chief engineer for the mission's return-to-drilling development, on Monday. "The test is to gain better understanding of how the force/torque sensor on the arm provides information about side forces."

It's essential that the arm's sensors pick up any sideways movement during drilling: these readings will be needed to control the position of the robotic arm so that the bit stays straight and isn't accidentally jammed into or destroyed by the unforgiving dust world's hard landscape. It was a lot more easier to control the drill bit when it was just going up and down between the two stabilizing bars set on the ground; the free moving robot arm makes life on Mars a lot more complicated for the American space agency in terms of aiming and setting down the spinning bit.

"We're replacing the one-axis motion of the feed mechanism with an arm that has five degrees of freedom of motion," Klein said. "That's not simple. It's fortunate the arm has the force/torque sensor."

Although further tests will be carried out on the equipment before any serious penetration takes place, Curiosity is now looking likely to begin drilling operations soon. The rover has drilled 15 holes in Mars over the past three years, and its 2.3mm (0.1 inch) bit has penetrated over 6cm (2.4 inches) into the surface.

Lest you think the drill shenanigans were evidence of sloppy engineering on NASA's part, it's worth remembering that Curiosity has already lasted double its expected lifespan with only minor issues. Given its predecessor Opportunity is still trucking 13 years after landing, we can expect Curiosity to go on exploring for years yet. ®