Spend a little bribe, er, time with me...

American tech giants have ramped up the amount of cash they spend on lobbying US lawmakers to get their own way, yet again. As congressmen consider regulating organizations from Facebook to Google, and mull antitrust crackdowns against Amazon, said corporations have responded by flinging more dosh at the problem.

The money is spent on, ahem, holding meetings between company execs and politicians so that businesses can push their agenda and swing decisions in their favor, which may not be in the interests of the people who elected said politicians.

The social network is being investigated by both halves of Congress for its role in the Russian propaganda campaign during the US presidential election, and this month has been on a huge PR campaign in the capital.

Likewise Amazon spent its highest ever amount on professional lobbyists – both individuals and companies that book face time with lawmakers and their staff where they press the company's viewpoints. Amazon spent $3.41m in the third quarter, up from $3.21m for the second quarter – which was also a record spend for the company.

As with Facebook, 2017 will almost certainly be the most expensive in terms of lobbying for Amazon. The web souk has strayed into the physical world with its purchase of Whole Foods and its increasing stranglehold over a large number of markets has led to calls for greater scrutiny of the biz.

Google spent less in the third quarter of the year to the wallet-busting Q2 spend of $5.93m, but it still spent $4.17m – higher than its average spend of $4.0m per quarter over the past five years. It, too, is on course to spend the highest ever amount on lobbying this year.

Google is facing a severe spanking and fines in Europe that have sparked some in the US to call for investigations into its market power.

Oracle is desperately trying to steer the federal government away from adopting open-source software as a default in an effort to cut costs. Oracle makes a significant percentage of its income from government contracts that use its database and other products. 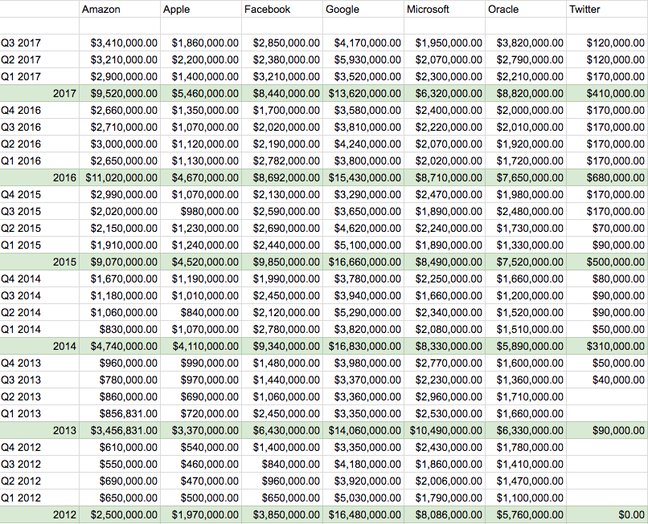 Full figures, compiled by us from official filings ... Click to enlarge

As well as renewed focus on tech giants because of their enormous influence and market power, the Trump Administration is proving to be costly for Big Internet, particularly on issues such as immigration, which many tech companies rely on to get skilled workers into the country but which has been the focus of ideological clampdowns by the White House. The other main issues concerning Big Tech revolve around upcoming rules on new technology such as drones and autonomous vehicles, as well as a push to force greater transparency. ®