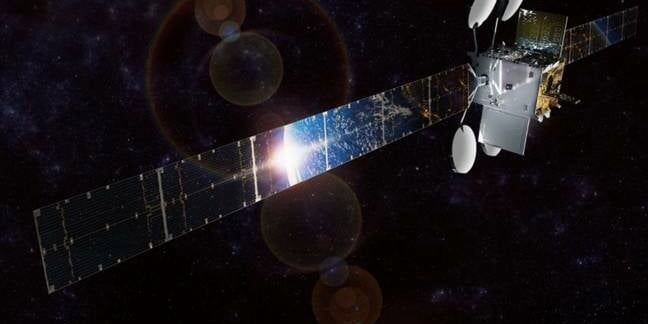 An artist's impression of a Viasat satellite

"Inmarsat was not compliant with its licence," Rick Baldridge of Viasat told The Register last week. "They built a satellite that was inconsistent with its original licence."

Viasat's allegation is that Inmarsat was in breach of its licence to operate from Ofcom by using its S-band frequencies for building part of the European Aviation Network (EAN). This network, as mentioned previously on The Register, is a grandiose EU vision to bring in-flight Wi-Fi to airliners.

The system extends existing satellite-based Wi-Fi services through a series of ground-based LTE stations. In theory, at lower altitudes the aircraft will talk to the LTE network, while above a certain point new antennas fitted aboard airliners (such as the one demonstrated to El Reg by Honeywell earlier this year) will talk to new, dedicated satellites reserved for the EAN.

Viasat's objection is that Inmarsat's original operating licence only authorised it to provide satellite services, and it says integrated air-to-ground services such as the EAN were not covered by this. Earlier in October Ofcom quietly tweaked Inmarsat's licence to authorise EAN work, building on previous legally binding EU Council decrees which left the British regulator with no real choice in the matter. An edited version of the new licence and some of the Ofcom decision-making around it can be read on the Ofcom website (PDF, 17 pages).

We asked Baldridge whether the threat of legal action was just sour grapes at Viasat not getting a slice of the pie. He denied this, saying: "If I have to adhere to regulations and another does not, we don't know how to play in that area. Consumers will suffer."

Baldridge added that at the start of the EAN project, Viasat had understood that it was just another S-band satellite service and decided not to bid. Had it been an air-to-ground service from the start, he said: "We would have bid. What was presented and what transpired were two different things."

British Airways' parent company, the International Airlines Group, will be the launch customer for the EAN. It can be seen as an attempt by the EU to make EU-based airlines compete with the in-flight Wi-Fi offerings on airlines such as Emirates, which receives hefty subsidies from the United Arab Emirates to provide inexpensive in-flight Wi-Fi for passengers aboard its long-haul flights.

Baldridge told us that part of Inmarsat's original licence set out precise specifications for future satellites, and further alleged that the satellite which Inmarsat eventually built was not compliant with that spec; instead, he said, it was optimised for the EAN before permission had been given.

Inmarsat veep Frederik van Essen told us: "The news that ViaSat is planning to take legal action against Ofcom comes as no surprise. ViaSat has made representations previously to the European Commission and failed. They presented similar arguments to Ofcom during last year’s UK consultation process and failed. Having been unable to win with their previous arguments, they are now resorting to legal action in yet another an attempt to delay the launch of the European Aviation Network."

He added: "We consider ViaSat’s claims to be entirely without merit and fundamentally misconceived. We remain on course to commence commercial services with our launch customer in the first half of 2018. Inmarsat will vigorously defend its interests and stands ready to intervene in this process in support of Ofcom or any other regulator."

Viasat has yet to start formal legal action, though El Reg is keeping an eye out for when it files suit against Ofcom. ®