Oracle storage architect has called for Oracle to make the ZFS filesystem a first class part of Linux and says conversations have taken place within Big Red to consider the possibility.

While the filesystem underpins Oracle's software-as-a-service and platform-as-a-service, it's invisible to users.

Maybee thinks ZFS is good enough that it deserves to be widely available, hence his wish that “What I would like to see happen inside Oracle is for ZFS becomes a core part of Linux, not an add-on part of Linux.”

“I would like us to look at Linux as a core supported platform, so every feature and bug we develop targeted so that Linux is always up to date.”

“Ideally it would be the default filesystem in Linux, that would be a huge win for us.”

To make that happen, Maybee said “I would like to see Oracle port its version of ZFS into Oracle's version of linux, and push that upstream.”

“Will that happen?” he asked, answering “That's hard to say. Oracle is very protective of its IP. But we have had conversations about it, there is a possibility there.”

If the possibility became a reality, it has the potential to end the long-running dispute over whether it's possible to include ZFS with Linux distributions. Ubuntu added ZFS in version 16.04, leading the Software Freedom Conservancy and Richard Stallman to argue, forcefully that licence incompatibilities mean it can't be done.

The root of the dispute is that Oracle applies the Common Development and Distribution License, version 1 (CDDLv1) to ZFS, and it doesn't have the same terms as Linux's GPLv2. Linux folk generally admire ZFS for its many fine qualities and many would like to use it.

Sun had just released a ZFS-powered storage appliance and Oracle founder Larry Ellison decreed they would become the standard at Big Red, necessitating the replacement of 12 petabytes of kit supplied by NetApp.

Maybee showed a slide from those days on which NetApp proudly proclaimed Oracle was its largest user, anywhere, ever.

“This was really a trial by fire,” Maybee said. “We were going in there and trying to force ZFS into a new model of storage into an operations organisation that was intimately familiar with NetApp.”

Complicating matters further, the ZFS appliance “had never been rolled out at this scale before and it was growing and evolving. “It was becoming a solid product but it took some time.”

Oracle therefore found itself employing several “tiger teams” to address storage-related problems and storage became the scapegoat for many problems.

“Overall these were pretty ugly days,” Maybee said. So ugly that the vice president in charge of the migration “requested a meeting with Larry. She walked in with a deck that was going to explain why ZFS was failing in her environment and why we had to go back to NetApp.”

“Famously, Larry looked at her and said there is no plan B, you will go with ZFS.”

And so Oracle did. 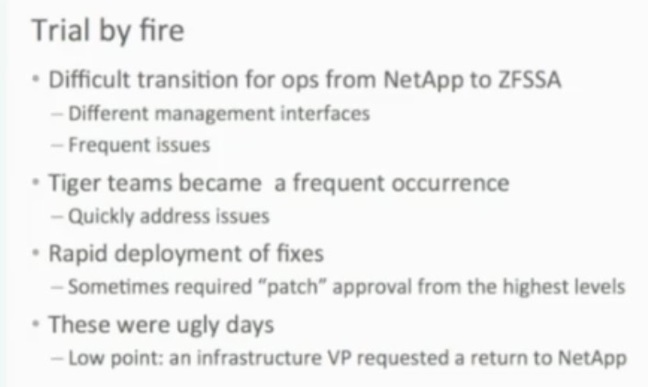 While Maybee saw that as a win for ZFS, the long migration also saw his team asked to work on stability rather than innovation.

Maybee's speech is available here, and also here in Dropbox in case anyone deems it too controversial to survive, as sometimes happens when vendors are embarrassed by a talk they didn't think would be reported. ®

* We've heard from another Oracle staffer who told us the NetApp-to-ZFS migration project started in "early 2009", before the April 2009 announcement that Oracle would acquire Sun.