It doesn't take much to confuse AI image classifiers: a group from Japan's Kyushu University reckon you can fool them by changing the value of a single pixel in an image.

Researchers Jiawei Su, Danilo Vasconcellos Vargas and Sakurai Kouichi were working with two objectives: first, to predictably trick a Deep Neural Network (DNN), and second, to automate their attack as far as possible.

In other words, what does it take to get the AI to look at an image of an automobile, and classify it as a dog? The surprising answer: an adversarial perturbation of just one pixel would do the trick – a kind of attack that you'd be unlikely to detect with the naked eye.

As explained in a paper, the researchers came up with the startling conclusion that a one-pixel attack worked on nearly three-quarters of standard training images.

Not only that, but the boffins didn't need to know anything about the inside of the DNN – as they put it, they only needed its “black box” output of probability labels to function.

The attack was based on a technique called “differential evolution” (DE), an optimisation method which in this case identified the best target for their attack (the paper tested attacks against one, three, and five pixels).

Naturally, more pixels makes the attack more effective: a three-pixel perturbation achieved a success rate of 82 per cent, and adjusting five pixels lifted that to 87.3 per cent.

Editing that one, carefully-chosen pixel meant “each natural image can be perturbed to 2.3 other classes on average”.

The best result was an image of a dog in the training set, which the trio managed to trick the DNN into classifying as all nine of the “target” classes – airplane, automobile, bird, cat, deer, frog, horse, ship and truck. 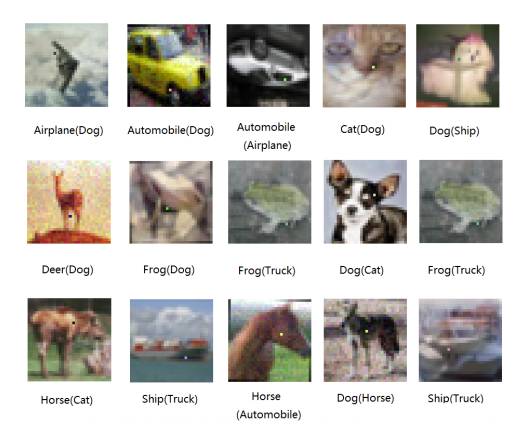 Images from the training set, mis-classified by changing one pixel. Image: arXiv paper

The sharp-eyed, looking at the test images, will note that the single-pixel attack was carried out against images of a mere 1,024 pixels. However, on something more substantial like a 280,000 pixel image (still not so large), only 273 pixels need to be perturbed and a human observer still might not notice the changes. ®