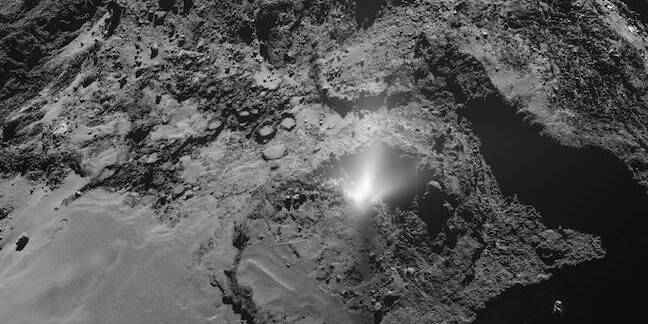 On July 3rd, 2016 something unusual happened on Comet 67P/Churyumov–Gerasimenko: a fountain of dust erupted out of a hole and spewed all sorts of stuff into space.

As luck would have it, Earth's Rosetta probe had five instruments trained on the fountain as it started to blow. Better yet, the probe flew through the plume of comet-stuff that resulted.

And now we can read all about it in the Monthly Notices of The Royal Astronomical Society, which has published Evidence of sub-surface energy storage in comet 67P from the outburst of 2016 July 03 explaining the event.

The paper says the plume originated from a a 10 m-high wall around a circular dip in the surface and continued for between 14 and 68 minutes. The event saw between 6,500 and 118,000kg of material ejected.

Things get interesting when the boffins consider the ratio of dust to water ice in the plume, because there was rather more dust than ice. Evaporation of ice alone can't explain the energy required to shoot lots of dust up into space, leaving astroboffins wondering what lurked beneath the surface of 67P that could power a plume.

The authors offer two theories about the plume. One posits a gas-filled pressurized cavity inside 67P, with a evaporation or some other process causing a crack through which gas, dust and water ice emerge. The second theorises the presence of “amorphous ice” that seldom saw the sun, perhaps because it is below the surface, which was exposed by the collapse nearby rocks or ice. Whatever exposed the ice to the sun, it vaporised, re-condensed and produced enough energy to create plumes of comet-stuff.

The first theory is supported by fractures on 67P that suggest pressure from below. The second stands up because of other observations of similar ice elsewhere on 67P.

At story's end, we have the amazing good fortune of Rosetta being in the right place at the right time, with instruments at the ready, but insufficient evidence to reach a firm conclusion. So now we have to go back, and to other comets. Don't we? ®