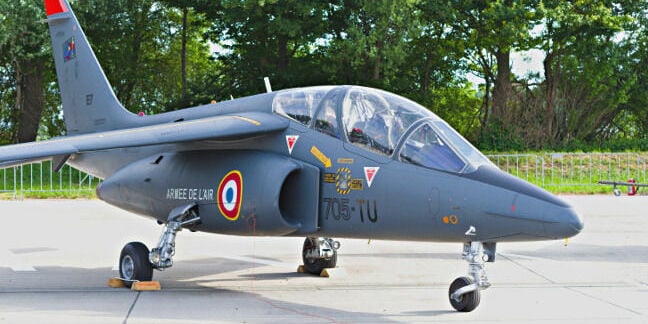 A Dassault-Dornier Alpha Jet, as flown by the Armee de l'Air

A French senator has put down a parliamentary motion demanding an investigation into Microsoft's framework deal with France's defence ministry.

Senator Joëlle Garriaud-Maylam tabled the motion, which calls for the creation of a 21-strong investigative committee, earlier in October. It is part of a long-running issue in France over the Microsoft deal.

The (translated) wording of the motion calls for an investigation into "the conditions in which the framework agreement between the Ministry of Defence and Microsoft was entered into and renewed, and to formulate proposals for strengthening digital sovereignty and cybersecurity in France".

Originally signed in 2009 for a four-year term, the framework deal has been criticised by free software advocates and others for, among other things, exposing the French military to potential American spying and for shutting out potential competitors.

France's April open software pressure group applauded Garriaud-Maylam's motion. The group's Etienne Gonnu told The Register, with reference to the deal: "In terms of public policy it makes no sense."

Garriaud-Maylam's mention of sovereignty touches on a thorny subject in France. The western European country has been a participating NATO member since 2009, following a four-decade sulk initiated by president Charles de Gaulle in 1966, in which he removed the French armed forces from NATO command. France also ejected alliance units from its soil over concerns that the UK and US were too dominant within NATO. Prior to de Gaulle's teddy/pram interface failure, France had been a founding member of the alliance.

Local reporter Jean-Marc Manach, writing on Le Monde's "Bug Brother" blog, said the deal "de facto excludes any other competitor" and quoted a French MoD report from 2008, which described the deal as putting the French army "at the mercy of the pricing policy" of Microsoft. He further alleged that the deal's exit fee is "1.5 years of contract".