One must wait one's turn

The Queen, accompanied by a Queen's guard and gentleman in a top hat, has been drafted in to help encourage Genevans to act more courteously when boarding trains.

The three actors, dressed as "quintessential" Brits, showed people how to board trams and buses in a polite and respectful manner this week, incentivising good behaviour by handing out After Eight mint chocolates.

On its Facebook page the campaign said: "The GE-laissesortir action has begun...! Three British tourists of a particular kind have come to lend a hand to their Geneva friends to convey the fundamentals of courtesy in transport. So British..!" 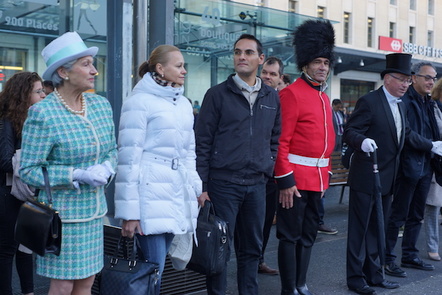 "On public transport the English take care to be respectful, they let people get off [before boarding]," transport minister Luc Barthassat told The Local. "These are things that unfortunately in Geneva we get the impression have been lost. When people are in a hurry they fail to pay attention to others."

Although anyone who has boarded the tube in rush hour in London might disagree.

One traveller commented: "Well, they'll need patience, because in Geneva there's work to be done."

Another said: "Great idea... Last trip to London in 2015: a young man (passenger) takes my coat and puts it in the baggage locker for me. In time to get out, he lets me pass in front of him.

"At the airport or on the subway, no one's crowding you. You ask someone which subway you have to take to go to this place, the person tells you and make sure you get in the right subway and in the right direction. Anyway, it's too bad the weather isn't better. Because for the kindness and self-discipline of English citizens, I would move."

A third commented: "In London, people wait for the bus patiently and they wait for the others to get off the bus before they get up." ®

Rise of the Machines 2020 just gets better and better