Fitbit health alert: You appear to be bleeding

Fitbit's year-on-year losses grew fivefold to $113.4m compared to a year ago, with sales of 3.6 million devices in the quarter, 7 per cent up from the previous quarter. The firm admitted it had been a "difficult year" as the fitness band craze diminished, with sales down considerably compared to the same period of 2016.

However, the company wasn't punished by investors, since Fitbit's proportion of high-value products is encouraging. Its first proper fitness watch, the Fitbit Ionic, went on sale in the quarter, and was greeted with a decent reception. Average selling prices are 12 per cent higher than this time last year. 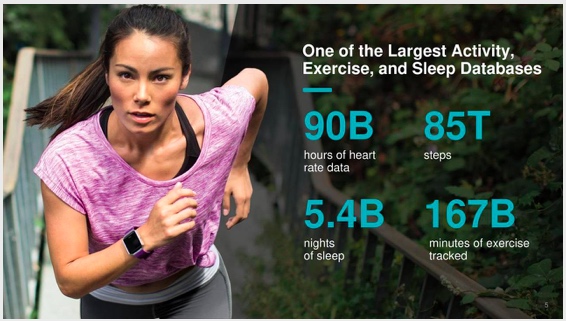 Fitbit's investor slides boast of how much data it has collected

The Christmas shopping season quarter is crucial, as Fitbit needs to persuade people who haven't yet bought into having their activity monitored that it makes a watch you can wear every day, rather than the generic wristband tat that has flooded the market. We'll know how well this went in February.

It's looking more like a two-horse race. Apple continues to keep its Watch aggressively priced – it actually cut prices in the UK this year. And over 80 per cent of punters don't have iPhone, leaving Fitbit the more attractive choice. ®