Scientists have uncovered a hidden void in the largest pyramid in Giza, Egypt, using muons – a particle typically produced by cosmic rays, according to new research published today.

The Great Pyramid, also known as Khufu’s Pyramid, standing over 146 meters (481 feet) tall, was built during the reign of Pharaoh Khufu from 2509 to 2483 BC, making it the oldest of the Seven Wonders of the Ancient World.

It has long been an object of fascination. Archaeologists have been studying the pyramid for at least a century, so it was a complete surprise when a team of researchers discovered a new structure measuring at least 30 meters (about 100 feet) above the Grand Gallery, a passage towards the King’s Chamber. 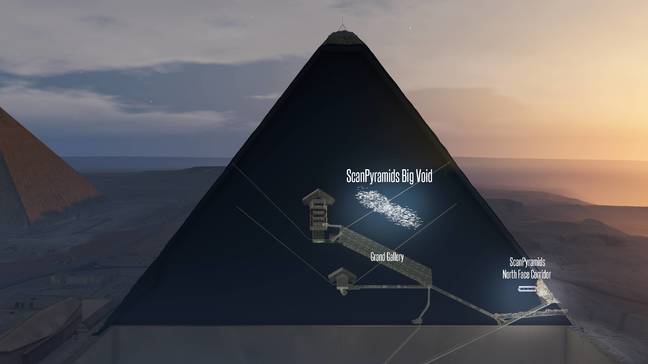 3D modeling of the void at an imagined incline ... Click to enlarge (Image credit: ScanPyramids mission)

The new discovery is the first major inner structure found in the Great Pyramid since the 19th century. Mehdi Tayoubi, coauthor of a paper describing the find and a researcher at the Heritage Innovation Preservation Institute, a non-profit organization interested in preserving culture through technology, said the result was surprising.

The boffins who stumbled upon the structure decided to call the mysterious cavity a “void” rather than a chamber. It is unknown if the void is horizontal or inclined, how it was made, what is contains, or what purpose it serves, Tayoubi said.

That job is for archaeologists and egyptologists to come up with a hypothesis or architectural explanation for the void, he added.

The detection of the cavity – an effort dubbed the ScanPyramids project – started two years ago, when a team of scientists were looking for a way to study the Great Pyramid without disturbing it. They turned to muon radiography, a non-invasive technique that involves sending beams of muons that can travel through thick slabs of stone, penetrating the walls of the pyramids before they decay or are absorbed.

By recording the position of direction of each muon arriving at muon detectors, eggheads can build up an internal picture of the pyramid. A high density of muons detected from a certain direction means that they are less likely to be absorbed and have travelled through a less dense region, such as the aforementioned void.

Three muon detectors independently uncovered the gap, confirming the discovery of a large space hidden in the Great Pyramid.

Muons belong to a family of particles known as leptons. They are similar to electrons, and have a negative charge, although they sport a heavier mass. They are present in the interactions between cosmic rays and atoms in the upper atmosphere of Earth, and streak through our planet close to the speed of light. Around 10,000 particles arrive per square metre per minute, apparently.

The results of the pyramid bombardment were published in Nature today, and have been described as a “breakthrough for the understanding of Khufu’s Pyramid and its internal structure.” It demonstrates how modern particle physics can uncover new information about ancient structures.

Apart from the size of the space, little is known about the void. To explore this further, the team are thinking about drilling a very small hole – measuring a few centimetres across – so that a tiny robot can fly inside to reveal the hidden details of the cavity. ®