Tesla's share price took a dive Thursday morning as Republicans in Congress revealed they were planning to kill off a US federal tax credit for electric vehicles.

The proposed US House tax bill calls for an immediate repeal of the $7,500-per-vehicle credit: something that would have an immediate knock-on impact for Tesla given that it produces electric cars.

Its share price today fell more than seven per cent to about $296 apiece from Wednesday's $321. The draft law also emerged as the Elon-Musk-led automaker announced its worst-ever quarter, recording a $671m loss and admitting it had not met its production target for its new Model 3 car, producing just 220 of them against its 1,500 target. A double whammy for Tesla, in other words. 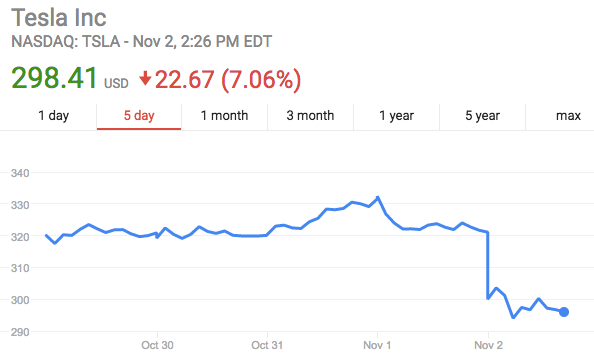 Economists believe that the tax credit is a key driver for electric car sales, and cite the example of when the state of Georgia cut its $5,000 tax credit and saw sales of electric cars slump from 1,400 a month to just 100 a month in response.

As an indication of how the $7,500 helps Tesla sell more of its vehicles, it even incorporates the figure into its pricing on its website, noting that the total vehicle cost is reduced thanks to the break – although you would still pay full price for the car and then would need to claim the credit back on your tax forms.

The bill itself – which still has to make its way through Congress and is essentially a blueprint for the Trump administration's tax shakeups – would kill off the electric vehicle break on the final day of this year.

Scrapping the leccy car deal will increase US tax revenues by $4bn, it is estimated. That's a good saving seeing as the Republicans are desperate to balance America's books while cutting things like the corporate tax rate.

Under the process the Republicans intend to use to pass their tax reform bill, it is necessary for the country's figures to balance – any cuts have to be met with additional tax income. So far, the plan is expected to cost the Land of the Free $1.5tr over 10 years.

As such, those behind the plan either have to find additional income, reduce their planned cuts, or take a different tack altogether, while bagging sufficient support from the Democrats to get the whole shebang approved. In short, anything in the current plan that increases tax revenue is unlikely to pulled out.

It's not just Tesla that will be hard hit by the removal of the federal tax credit: General Motors has been pushing its Chevy Bolt electric car, and under California state law, it is required to sell a certain percentage of electric cars each year or effectively pay for not doing so by purchasing green credits.

GM said in a statement following the news: "Tax credits are an important customer benefit that can help accelerate the acceptance of electric vehicles. Because General Motors believes in an all-electric future, we will work with Congress to explore ways to maintain this incentive."

Tesla has yet to respond – even though the markets have already spoken. ®

The proposed tax bill would leave tax credits for solar-powered properties mostly intact, for now, which is useful for Tesla. After all, it sells solar-charged Powerwall batteries for homes via its SolarCity wing, so a tax break for installing solar-powered equipment is a decent lure to attract buyers. These credits, under today's system, cover 30 per cent of a solar installation's cost, and reduce over time until 2022, at which point the rate is reduced to 10 per cent for commercial work, and cut off for everyone else. The proposed tax bill would extend this deadline five years to 2027, after which the credits are axed completely.

Finally, the draft reforms are not good news for the wind-farm industry.