Climate apocalypse, you say? Meh, at least we have truffles 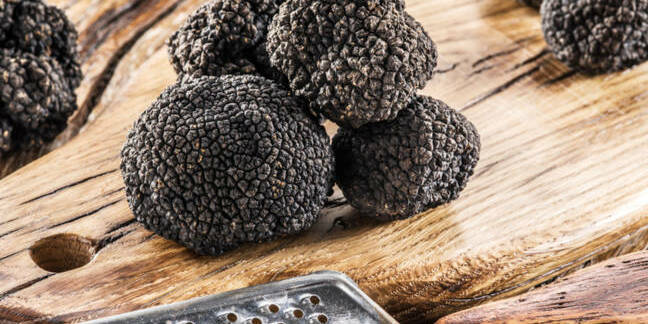 The Périgord black truffle has survived UK weather and grown in Wales*.

Paul Thomas, who led the research at Lancanshire-based truffle biz Mycorrhizal Systems, told The Register for his team: "It's completely unexpected."

The price of the Périgord black truffle, known scientifically as Tuber melanosporum, varies from year to year based on droughts and other conditions. In 2016, it was available wholesale for a pocketbook-clenching €1,000 a kilogram, Thomas said.

Normally, it thrives in warm habitats at a latitude of between about 40 and 48 degrees – such as Italy, Spain, New Zealand, South Africa or parts of the US. Although it's also been cultivated in the island of Gotland, Sweden, at 57 degrees.

Now boffins have grown it at 52 degrees north, about 22km from the sea on a former grassland in southeast Wales. A study describing the discovery, in collaboration with a researcher at Cambridge University, appears in the journal Climate Research.

The work began back in 2008. Thomas said the company planted a holm oak (Quercus ilex) host tree to see how it fared in the cold.

"It was so far north, I didn't think it would fruit," he said.

The climate must have been "just about suitable," he said, because on March 27, a springer-cocker spaniel mix named Bella discovered a 16g truffle at the site. Its fruiting was probably a combination of mild winters and "climatic triggering".

He said the team has trees at other sites and is studying climates to make predictive models for where it would be good to grow. Other parts of the UK have similar environments, he said, so "there are always unknowns" but if climates stay similar it should continue to grow in the future.

Outsiders are not really surprised.

Francesco Paolocci, who has studied Tuber melanosporum at the Instiute of Bioscience and Bioresearch in Bari, Italy, told The Reg that it's "likely" this truffle wasn't a one-time fluke.

He said "it is more than plausible that its cultivation range moves northernward" as a warming climate means that northern European countries "are experiencing a climate which thus far was typical of the Mediterranean basin".

Claude Murat at the French National Institute for Agricultural Research told The Register "there is a real potential for truffle cultivation" in the UK, although was "not fully convinced that climate change explain this harvest" because the UK has "suitable soils", "less hydric stress than in other European regions" and this all occurred "in a plantation and not in a natural environment".

But while those still smarting from shrinking chocolate sizes might cheer at the country's newfound prize post-Brexit, Thomas said it's hardly a silver bullet.

"It will be good for the UK," he said, but truffles take a "long time" to grow and require a "significant" area. Meanwhile, changes in climate are leading to worrying reductions in the Mediterranean outputs.

He said he doesn't expect the truffle's price to drop, even if the UK ramps up production correctly. ®

* Or rather the second, or perhaps even the third. Since the publication of this story, it has been, er, unearthed that this was not the first Tuber melanosporum harvested in an orchard in UK. Two years ago, another one was found in another orchard, and it was duly tagged and published at Kew Garden fungarium.

Brexit? HP Inc laughs in the face of Brexit! Hard or soft, PC maker claims it's 'no significant risk'

Must just be the rest of the tech industry then

Who loves Brexit? Irish distributors ... after their sales jump by a third

Analyst says firms insuring against hard exit by the UK

It's just one big opportunity to make money

I didn't see that on the side of a bus