+Comment Dell EMC has retrofitted flash to its SC array, added deduplication to its Unity array and devised a loyalty programme to keep its mid-range array customers onboard.

Dell EMC positions SC for block-access applications needing little or no file access and with all-inclusive software licensing, and Unity for unified file and block access. Although the SC (aka Compellent) comes from the Dell side of the house and Unity (aka VNX) the EMC side, there is now a single engineering team, albeit with different technologies and implementations, such as deduplication.

There is now an SC all-flash product set with single and federated arrays. 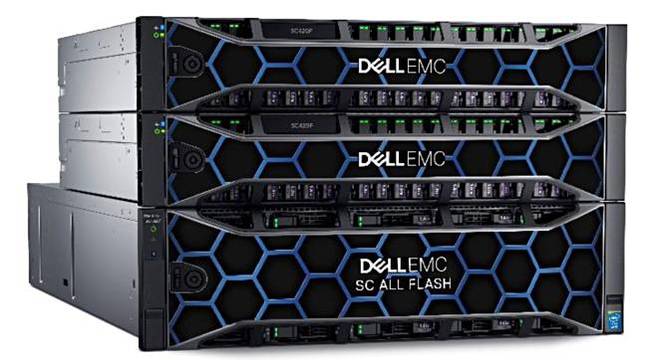 There are two base products, SC5020F and SC7020F, which differ by having 222 and 500 maximum drive number limits. Both have a 3U enclosure and dual active/active controllers with 8-core Intel Xeon processors, up to 256GB memory, 30 x 2.5-inch drive slots, and both 10GbitE iSCSI and 16/32Gbit/s FC network connections. The iSCSI supports either file or block protocols.

The two products scale up using 2U x 24-slot SC420F expansion blocks, which have 12Gbit/s SAS back-end connectivity. A single array can scale up to 399,000 IOPS and 3PB of raw capacity.

Multiple SC arrays of any size can be federated into 10-node systems with seamless volume movement between arrays. A federated system can scale out to 3.9 million IOPS and 30PB raw capacity.

Write-intensive and read-intensive SSDs are available, providing separate storage tiers, and can be mixed in a single system. Self-encrypting drives are also on the menu. Both compression and deduplication are available and selectable per volume. 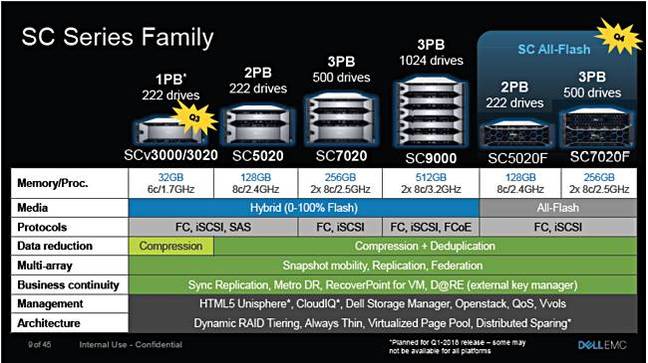 There are multiple RAID options; 0, 1, 5, 6, RAID 10, and RAID 10 DM (Dual Mirror), and the system auto-provisions and dynamically restripes multiple RAID levels on the same tier, with no need to preallocate RAID groups.

SC data management services such as Live Migrate and Live Volume are available and included. CloudIQ array analytics for SC will be available next quarter.

The deduplication is done inline and can be set on or off per LUN. The technology is different from that used in the SC's deduplication. It is accompanied by compression and a zero-detect capability, with data reduction being applicable to both file and block storage. There is a 4:1 data efficiency guarantee. 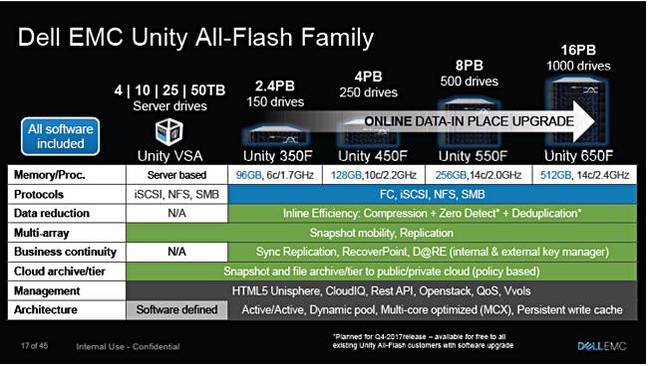 Snapshots can be replicated to a mirror site. The (forever) snaps are envisaged as being used for local protection or test/dev, being taken on an all-flash Unity and going to a hybrid. They could go off-site backup or DR, going to a hybrid Unity or to a VSA, or to the cloud for backup and archive.

Various suppliers have come up with customer loyalty programme, and now here is one for SC and Unity customers. It features the 4:1 storage efficiency guarantee for all-flash storage, a three-year money-back guarantee, non-disruptive data migration, all-inclusive software licensing, hardware investment protection, and, for Unity only, built-in Virtustream storage cloud usage.

The money-back guarantee says the arrays will perform as advertised or customers can get their money back. The Virtustream facility is for customers to automatically tier files and storage snapshots to the cloud with no capacity costs for one year, up to the programme allotment (20 per cent of the capacity purchased). It is only for Unity customers.

Note that Dell EMC states: "Customers purchasing new Dell EMC Unity or SC Series products, whether direct or through channel partners, and have a valid maintenance contract are eligible for the program at no additional cost." Not for existing customers in other words.

The hardware investment protection angle is a trade-in facility for SC and Unity customers buying another Dell EMC product.

These announcements show no wavering by Dell EMC of its commitment to keep both the Unity and SC mid-range array families as valid and developing products with a future.

We see cross-fertilisation with, for example, Unity getting deduplication. There will probably be more of this.

This will help Dell EMC fend off encroaching attacks from other mid-range storage suppliers who might be tempted to say the SC is going to die and users migrate to Unity. Such thoughts can now be categorised as FUD.

Similarly the loyalty programme will help fend off sales and marketing attacks from other vendors such as Pure with its Forever Green programme.

The SC all-flash arrays will be shipping in December. Unity OS v4.3 will be made available in January 2018 to Dell EMC Unity customers with a valid support contract. The Future-Proof Storage Loyalty program is available now with the purchase of any new SC Series or Dell EMC Unity data storage array directly through Dell EMC or any of its certified channel partners. ®