The P-series' hardware design is straightforward enough: it's a 2U Intel box that can run up to 24 NVMe SSDs in U.2 format, dual Xeon Skylake Gold-level 6126 processors and 192GB (12 x 16GB) of RAM. The networking interface cards are dual 100GbitE or 40GbitE QSFP+ NICs, with separate front-end and back-end data paths.

The latest Qumulo Core software delivers continuous replication and supports AWS as a replication target that is synchronised to a source cluster. It has a REST API interface.

There are a minimum of four nodes in a cluster. A node delivers 4GB/sec of bandwidth, hence a 4-node set provides 16GB/sec, and a 400-node set pumps out 1.6TB/sec. Qumulo says the system copes with both single-stream (video-editing) and multi-stream requirements.

It scales to billions of files and, Qumulo says, can handle small file workloads as well as large file applications. 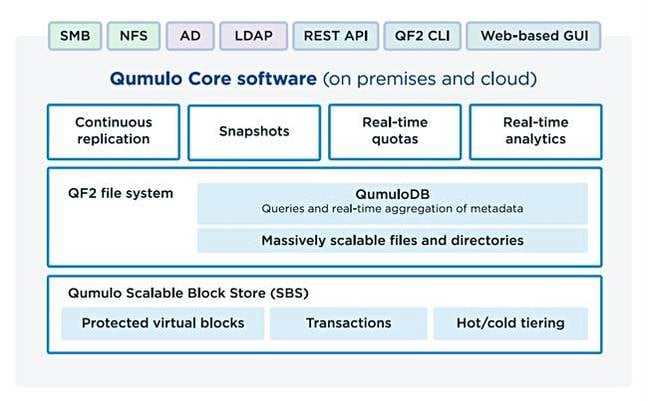 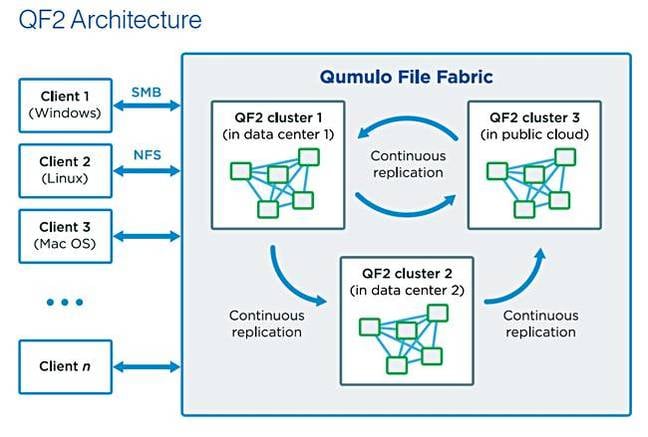 The system management provides real-time visibility and control of system performance, with analytics focussing down to the file level when trouble-shooting. Cloud-based monitoring of the filer cluster can detect an oncoming SSD failure and alert customers and provides historical trend data.

Qumulo expects to sell all-flash QF2s into the machine learning applications, genomic sequencing and analysis, high-resolution video editing and scientific computing markets. They all have a need for fast performance processing of file-based workloads, including large-scale datasets.

The company claims QF2 all-flash clusters deliver the best price performance of any all-flash file storage system available today. It has hundeds of customers, including DreamWorks.

The HPC scale-out filer product space is getting rather crowded.Dell EMC has refreshed Isilon and Panasas has introduced new kit, and SW-only companies like Elastifile, Rozo and WekaIO, not forgetting IBM with Spectrum Scale and Red Hat with Ceph.

HPE, lacking its own in-house scale-out filer, is partnering far and wide, with DDN, Qumulo, and WekaIO.

Qumulo's P-series products are available with subscription pricing, not that we have seen any prices yet. ®

Manufacturers allegedly told to connect to NavIC by 2023, which did not make them happy at all
Personal Tech28 Sep 2022 | 1