The most violent gravitational waves in the universe from supermassive black hole prangs will be detected to within ten years, according to research published on Monday.

Gravitational waves were predicted by Albert Einstein and finally discovered in 2015, a century after his theory of general relativity was formalized. Ripples through spacetime are generated when black holes collide. As they combine, a proportion of their mass is converted to energy and radiates away as a gravitational wave.

So far, the waves detected by the Laser Interferometer Gravitational Observatory (LIGO) and Virgo have been from the mergers of black holes less than a hundred solar masses. That’s tiny compared to the gargantuan monsters lurking in the center of galaxies that can be millions or even billions of solar masses.

The gravitational waves between these colliding supermassive black holes will be observable within a decade, according to a paper published in Nature today.

Chiara Mingarelli, lead author of the study and a research fellow at the Center for Computational Astrophysics at the Flatiron Institute in New York City, said the signals “from these supermassive black hole binary mergers are the most powerful in the universe. They absolutely dwarf the black hole mergers detected by LIGO."

Although they are the most powerful source of gravitational waves, current observatories will never be able to sniff them out because they are not sensitive to the same wavelengths of the wave.

To hunt for these large ripples, astronomers will have to focus their attention to pulsar stars instead. These objects are fast spinning neutron stars that flash beams of radio waves, leftover material from dead stars.

If a gravitational wave emitted from a supermassive black hole merger event passed by a pulsar, the rhythm of its flickering light will be affected. The space between Earth and the pulsar will be stretched and compressed as the wave passes through, allowing scientists monitoring the pulsar signals to detect the signals.

The researchers gathered data to count the number of nearby galaxies that may host pairs of supermassive black holes, and combined it with a map of nearby pulsars to calculate the probability that a powerful gravitational wave signal would be detected.

"If you take into account the positions of the pulsars in the sky, you basically have a 100 percent chance of detecting something in 10 years," Mingarelli said. "The bottom line is that you're guaranteed to select at least one local supermassive black hole binary."

Not so fast, what about the final parsec problem?

A surprising result was that the most energetic gravitational waves could be the most difficult to detect.

Despite larger galaxies housing bigger supermassive black holes, the large masses mean that the collisions are faster and more violent. It reduces the window of time that the gravitational waves can be detected. A merger event in a giant galaxy like M87, for example, would emit detectable signals for about four million years. But a smaller galaxy like the Sombrero Galaxy has a longer window of 160 million years. 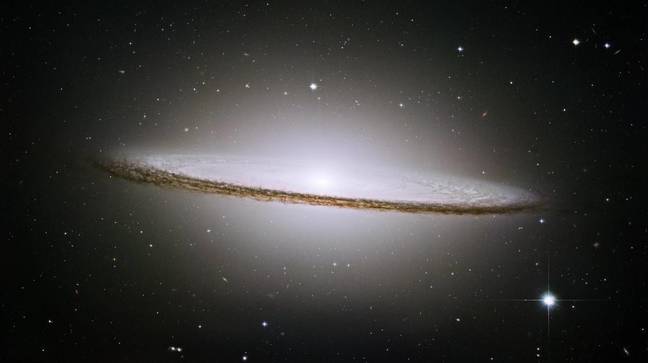 The Sombrero galaxy measuring about 15 kiloparsecs or about 50,000 light years across. Image credit: NASA/Hubble Heritage Team

Detecting these impacts will give researchers a way to study how massive galaxies merge, an important step to understanding how the universe evolves over time. If the scientists fail to find such an event, it could be because colliding supermassive black holes slow down when they are separated by three light years or one parsec.

The ‘Final Parsec Problem’ describes a situation where the supermassive black holes spiralling into one another have to lose energy to its surroundings in order to smash into one another. But as they get so close to one another, nearby stars and gas have been booted away that there is now less material to transfer energy to and so they fall into each other more slowly.

That process could take longer than the current age of the universe, so “it’ll be interesting either way,” Mingarelli said. ®