HPE's Apollo 'Skylaked', will get ARM-wrestling little brother next year

Some of HPE's supercomputer Apollo servers are Skylaked and can now say hello to an ARM-powered infant sibling.

HPE's Apollo-related announcements at SC'17 are:

We should note that the Apollo 2000 Gen 10 is not the same as HPE's Apollo 10 system. Think of current Apollo systems without the Gen 10 moniker as being Apollos using ProLiant Gen 9 servers (pre-Skylake).

Alternatively, the r2000 can accomodate 4 x XL170r servers and no GPUs. You can choose between HPC/supercomputing with GPUs or without.

The r2800 chassis model uses “drive mapping” to allocate storage to each server in the chassis. The r2200 and r2600 allocate drives equally across the server nodes.

There is no data sheet available for this server. We understand it uses Cavium 64-bit ARMv8-A ThunderX2 CPUs but we don't know the form factor, the CPU count, the RAM or any other technical detail.

HPE says it supports standard HPC provisioning, cluster management and performance software. It says it's built for memory-intensive HPC workloads and delivers up to 33 per cent more memory bandwidth than today's industry standard servers, without identifying which industry-standard servers it means.

The thing supports Mellanox InfiniBand and Ethernet fabric access and you can run Red Hat Enterprise Linux and SUSE Linux Enterprise Server for ARM on it.

This is a weird Apollo as it is not classed as an HPC-level system on HPE's Apollo page on its website. 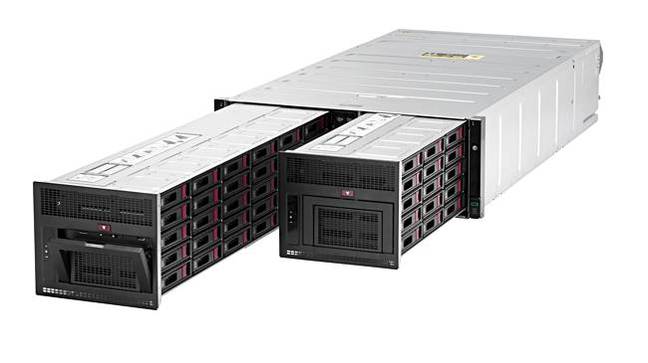 HPE says it has 16 per cent more cores than the previous generation and the NVMe cards can be used for a Scality RING metadata cache, leaving all the LFF drive bays for object data storage.

We should also note that the 4510 Gen 10 has a new front-loading, dual-drawer design with standard rack depth.

This is straightfrward, with LTO-7 drives moving to twice-the-capacity (30TB) and 20 per cent faster (at up to 360MB/sec transfer rate) LTO-8 tapes and LTO-8-supporting (SpectaLogic) TFinity ExaScale tape library.

HPE suggests that tape is seeing a resurgence as an added layer of protection against cybercrime and ransomware attacks.