In 71,000 years, it'll be closer than disappointing dustball Proxima Centauri b 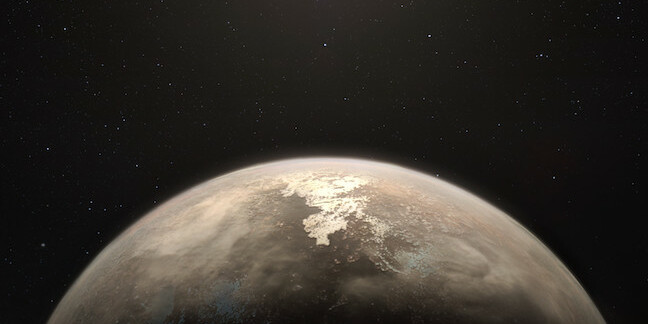 An artist's impression of Ross 128 b, the second closest temperate exoplanet to Earth after Proxima Centauri b. Credit: ESO/M. Kornmesser

A new study to appear in Astronomy & Astrophysics has detected what could be our closest exoplanet that is not only rocky, but also orbits a star with a low amount of solar activity that could help an atmosphere survive – Ross 128 b.

Proxima Centauri b, about 4.25 light years away from our Sun, garnered a lot of media attention when discovered because it's an Earth-sized planet likely in the special "Goldilocks" habitable zone of its star where liquid water could exist on the its surface.

"Unfortunately, it's a very active star," said lead author Xavier Bonfils, an astronomer at University of Grenoble Alpes in France. Proxima Centauri has regular solar activity that could erode or vaporise any atmosphere, if one existed.

The red dwarf Ross 128 is located about 11 light years away from our Sun, in the Virgo constellation. It has much less solar activity like flares, making it much more "quiet", Bonfils said, and marking the newly minted Ross 128 b as a better candidate to host liquid water (and hence life).

He added: "There are a few stars with similarly low activity and with exoplanets, but not as close as Ross 128 b."

Bonfils and his fellow researchers discovered the exoplanet by examining changes in the star's spectra. Based on the colours, they could tell that a nearby object's gravity was tugging on it.

The signal suggested a year on Ross 128 b lasts around 10 Earth days. It also revealed a minimum mass of about 1.3 Earths, and Bonfils said there's about a 1 per cent chance it's bigger than 4 Earth masses.

The planet lies on the hot side or inner edge of the habitable zone, Bonfils said, so it's not clear whether liquid water would exist on the surface (a lot of clouds would be needed). The presence of an atmosphere – which depends on knowing how much light the planet reflects back to space – is also unclear.

But Bonfils says the team is "confident it is rocky" because, even if there is a correction factor, all detected exoplanets of less than four Earth masses have been rocky.

He added that the system is moving towards us and in about 71,000 years Ross 128 b will be even closer than Proxima Centauri b.

Abel Méndez, a planetary astrobiologist at University of Puerto Rico at Arecibo, told The Register: "The fact that Ross 128 is a nearby star with a planet in the habitable zone, albeit in the hot side, makes its discovery as important as the planet found around Proxima Centauri."

Didier Queloz, an astronomer at Cambridge University, told The Reg that the lack of flares and "strong sign of activities in the spectra... suggests [the] star is old".

He said exoplanets are typically found around M-class stars near and far so Ross 128 b "is not a complete surprise" but he found it "interesting" that the star "is very close".

Parkes, Narrabri slimmed down and SKA will have to do without a Chief Scientist

Gravitational waves provide key to some of the universe's greatest mysteries