While still well short of its fiscal 2015 revenue glory days, NetApp has said its all-flash array sales are on fire, and expects more of the same.

Revenues of $1.42bn in its second fiscal 2018 quarter were 6 per cent up year-on-year and 6.7 per cent higher sequentially. This beat Wall Street's $1.38bn consensus.

NetApp said its all-flash array annual run rate was now $1.7bn, up 58 per cent y-o-y. About 10 per cent of its installed base is using all-flash arrays so it has a lot of potential sales there in the future. 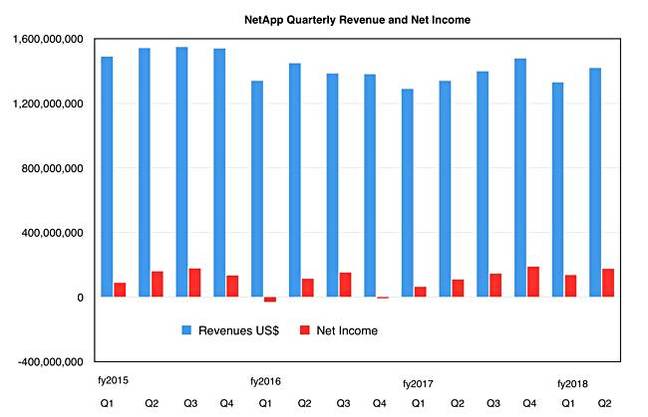 In the earnings call CEO George Kurian crowed: "We are undoubtedly out-executing our competition on all fronts."

Don't take this the wrong way, Pure Storage – are you the next NetApp?

Next quarter's revenues should be between $1.425bn and $1.575bn, $1.5bn at the mid-point, which would be a 7 per cent year-on-year increase. CFO Ron Pasek said: "We are planning the long-term business for low-single-digit revenue growth."

Beyond Q2, Kurian said: "We are raising the guidance for the second half of the year.

The firm's revenues have some way to go before regaining their fiscal 2015 levels but, at this rate, it should get there in fiscal 2019. ®