Infinite IO has enabled clustering of its metadata accelerators to scale performance.

The company, which brands itself infinite io, produces 2U rackmount metadata-accelerating network storage controllers (NSC) that sit in the network between file-accessing servers and NAS arrays. They serve metadata requests from memory, faster than direct from the NAS array, and transparently. They need no software or system changes in the accessing servers or array, and speed overall filer data requests by dealing with the metadata part faster.

There are two basic products. The NSC-055s is a straight metadata accelerator. The NSC-110 adds tiering to an object store, either on-premises or in the cloud, and this product can be clustered. Both keep copies of all metadata stored in the attached storage and keep it current by using deep packet inspection.

CEO Mark Cree says: “Once installed, we’ve seen the NSC-055s offload as much as 90 per cent of all requests going to storage, and our customers have seen dramatic reductions in workflow processing and response times.”

The NSC-055s can be upgraded to NSC-110 functionality with a software injection. It can now be clustered as well, with a minimum of three nodes and 24 x 10Gbit/s port pairs. The cluster can then can serve up to 3,000,000 metadata requests per second with an average latency of 65 microseconds. 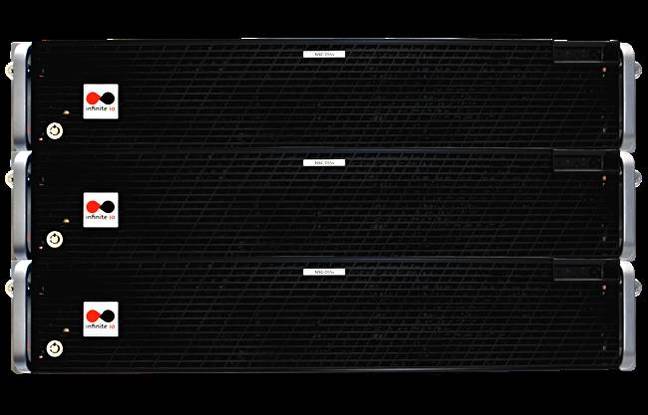 Infinite IO suggests an all-flash array's average latency is between 500 and 1,000 microseconds. Customers can scale up the clustered NSC-055s' performance by adding nodes, it added.

Who, Me? Fake BSOD became tool of revenge when a staffer ignored the sensible rules of seniority
Personal Tech26 Sep 2022 | 6