Google opens Workspace to anyone with a Google account, but you'll need to cough up for the good stuff

Google is extending Workspace, its rebranded productivity and collaboration tools, to "anyone with a Google account", and will introduce Workspace Individual subscriptions with "premium capabilities."

Workspace was launched in October 2020 as a more integrated approach for users of Google's business applications, including Gmail, Docs, Sheets, Slides, Calendar and Meet, formerly known as G Suite.

The name likely comes from the idea of forming collaboration spaces, rather than merely working on documents. An existing feature called Rooms lets users bring chat, documents, and tasks into one web page. This is set to become rebranded as Spaces, "a dedicated place for organizing people, topics and projects," according to VP Javier Soltero.

The company has now said: "Starting today, all of Google Workspace is available to anyone with a Google account." The statement should be qualified. 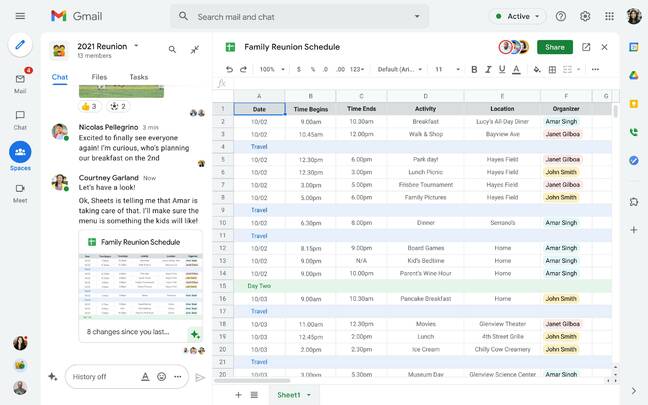 First, some key features of Workspace have not yet been released. "Over the summer, we'll evolve Rooms to become Spaces and introduce a streamlined and flexible user interface," said the post. Second, the free version is limited. Google has introduced a new subscription called Workspace Individual, which adds "premium capabilities." The exact list of what these capabilities are is to follow, but we can expect them to include custom domains, additional security features, increased limits for Meet videoconferencing, live streaming, and premium support.

The company told us that Workspace Individual will cost $9.99 per month – more expensive than the existing Business Starter package, according to the pricing on this page, but no doubt with better features. The target market is "individual business owners."

Last month, at its I/O event, Google launched Smart Canvas, which adds features such as "smart chips", pop-up panels which show details of people, files and meetings recommended by its AI engine for insertion into a document. These are in Docs now and coming to Sheets "in the coming months." Another new feature is "topic voting tables," polls for quick insertion into collaborative documents, and pageless docs, which are not paginated unless converted to PDF for printing.

Another key feature is "picture in picture," where you get to see a small video of the presenter when they are sharing content in Docs, Sheets or Slides. Users can present content to a Google Meet conference directly from the document they are working in. Also coming "in the next few months" is emoji reactions in Docs – just the thing for those dull business meetings. There is also an offer of "assisted writing" including "warnings about offensive words and language" as well as suggestions, no doubt AI-driven, to "make your writing more impactful."

Users wishing to try out the new Workspace experience are directed to enable Google Chat in place of the now-legacy Hangouts. Once enabled, Rooms would become available within the Chat application. 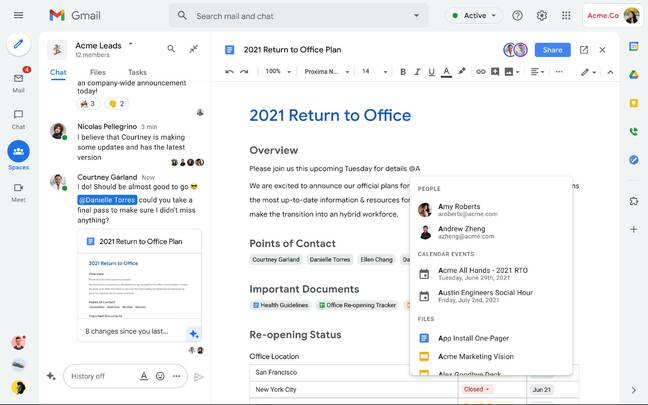 New Spaces feature including a document with a Smart Chip

Google's main competitor in this space is Microsoft, and this battle remains to some extent one of hybrid (Microsoft) versus web-based (Google) collaboration. Online collaboration has always been more natural on Google's platform, working in the browser, versus the Microsoft world of documents in desktop Office, and with Workspace the company is attempting to press home this advantage. ®