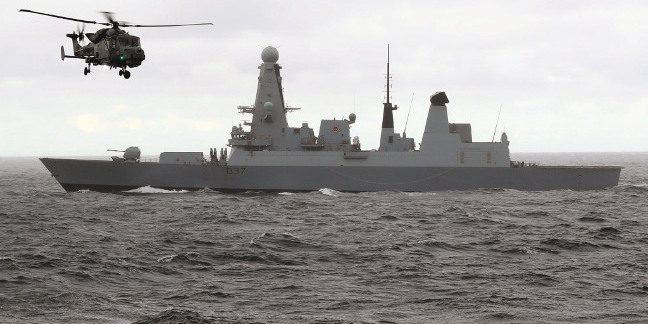 A Type 45 destroyer has been recalled to Britain with propeller problems, leaving the Royal Navy's traditional "east of Suez" deployment without proper warship cover.

As revealed in The Times, HMS Diamond is on her way back to the UK after a propeller problem proved too much for the ship's crew to repair on their own.

The problem is not linked to the Type 45's notoriously unreliable WR-21 engines. Rumours have swirled that Diamond is a testbed for an interim fix before a proper solution is rolled out in 2019.

As discussed elsewhere, including on the Thin Pinstriped Line defence blog, the withdrawal of Diamond from her planned nine-month deployment leaves naval planners in a very difficult situation. While the RN does have a permanent presence in the Middle East, at the moment it is down to four minesweepers and their lightly armed support ship.

Nearly a year ago today the First Sea Lord, Admiral Sir Philip Jones, complained about negative media coverage of the RN, writing: "The Royal Navy may be smaller than in the past but has a strong future so this is no time to talk the Navy down."

Without a proper destroyer (anti-air) or frigate (anti-submarine) on the scene, the five British naval vessels in the region are at increased risk of, if not an outright attack, something provocative and cheeky – such as when Iran snatched a boat containing more than a dozen British sailors.

The withdrawal of the destroyer reveals the wider problem that lack of funding, and all the knock-on effects that causes, has on the Royal Navy. In yesterday's Budget, chancellor Philip Hammond did not mention defence, though the Ministry of Defence's budget is set to increase by a billion pounds per year until 2019. This may sound like a lot until one considers that the MoD's budget is £36bn – and defence-watchers reckon the department needs a lot more cash than that to follow through with its spending commitments.

Already, Parliament has been told that flagship British defence projects such as the F-35 fighter jet may be cut back, in response to the value of the pound sinking against the dollar over the last year or so. ®