Microsoft isn't short of good ideas – but getting good ideas into Microsoft products, which then stay alive for a long time, is another thing.

New builds of Windows 10 will feature a couple of these – and they're features that hark back to the utopian computer labs of the 1970s.

One feature, Sets, yokes related documents together, although there's no graphical representation of the bundle, as there was in HyperCard, the first and best-known commercial implementation of the idea.

"The concept behind this experience is to make sure that everything related to your task – relevant webpages, research documents, necessary files and applications – is connected and available to you in one click," Microsoft's Terry Myerson explained in an email to Windows Insider guinea pigs.

Yes, that does sound like a HyperCard Stack, Terry. The thing is explained in this video here.

So what happens if you decline to open up all the apps when prompted. Is the association lost forever? Or retained in a list of Sets somewhere? [A set list? – ed] We'll have to find out.

New Windows 10 builds will also feature Timeline, a cross between Time Machine and the old Office Journal, now discarded. Microsoft first showed off Timeline at Build 17 in May, promising it would be in release Autumn builds, only to postpone it. 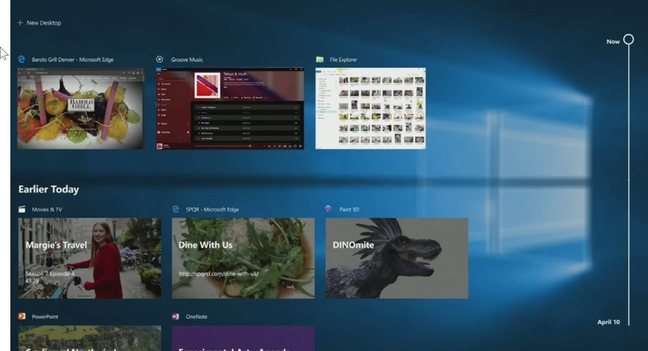 This is a familiar story: the "People Experience" was shown, held back and eventually plopped out in a form that fell far short of the hype. Timeline is another attempt to give an alternative way of accessing data than apps and files.

Why the 1970s reference? Because back then researchers and designers on the bold new frontier of computing weren't slavishly chained to ideas like "files as hard containers (and boundaries) for things or between things". Smalltalk is a good example of thinking at the time. IBM's AS/400 (where the file system is a database) and its OS/2 Workplace Shell were the last commercial expressions of such free-thinking. The latter vaguely resembled sets: when a "Workplace Folder" was opened or closed, it opened or closed all the associated documents that were in it.

Now imagine being able to group people with a timeline – as the Office Journal (almost) could. Microsoft wouldn't have to buy SalesForce, then.

More seriously, it is the sort of useful feature whose absence reminds you that in many ways, we’re still in the computing Stone Ages, only with 64-bit colour stone. A kind of neo-Paleolithic age. ®

If you want more HyperCard you can catch up with its creator Bill Atkinson here or trying it online at Archive.org's Mac OS System 7 emulator.