Is Oomi the all-in-one smart home system we've been waiting for?

Maybe. After the bugs are cleaned out...

Review Typically when reviewing new electronic products – especially if it's a system of interacting components – you start from a very positive place.

You imagine you could have in your hands the next big device – the thing everyone will be getting excited about in a few months' time – and then slowly, as you find its bugs and flaws, you fall out of love with it.

Weirdly, for the Oomi smart-home system, it was the other way around – at least for this reviewer.

It didn't help that the base on which the system's sleek black controller rests fell apart as we removed it from the box: The bottom came off revealing some very less-than-space-age electronics.

And then there was a blocky camera – literally a cube – that seemed unnecessarily large. We got it up and working with the streaming image on the tablet controller and the image was… okay. Not great. It also had an irritating delay despite being on a fast wireless network and the cube and tablet being right next to one another.

It's safe to say first impressions were not high. The marketing materials were slick – the controller resting on a designer kitchen island and young, beautiful people using it to do things like turn on lights, monitor their house, turn on the security, etc. The reality was more mundane.

But as we stuck with it, and methodically went through the other components supplied by the company – motion detectors, light bulbs, light strip, multi-sensors – the system started coming into its own. 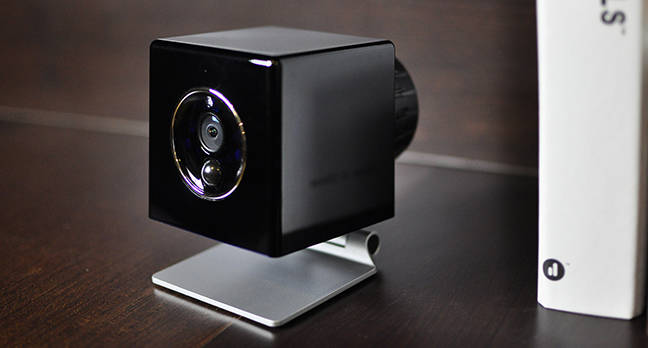 The Cube camera: why so bulky? Because it's also the system's hub

The big selling point of this system for most people will be a tiny orange dot on each piece of equipment. You hold the part with the dot on it close to the controller tablet and it instantly communicates with it. The tablet buzzes and a little pic of the component pops up on the screen. It is in the system and ready to be configured. Done in less than half a second.

Anyone that has set up a smart home system will immediately appreciate this. No more scanning bar codes and typing in codes, or connecting your phone to its WiFi signal, typing in your WiFi password and then returning back to it via an app. Just wave the parts close together and you're done.

The irritations with Oomi also fade as you get used to its approach and realize that whoever has designed this system has come at it from a different angle.

The Cube, for example, is not just an oversized camera but the hub of the system. It communicates with all the other devices and sends commands. Once you grasp that it and not the tablet is the center of intelligence, suddenly the rest of the system starts to make sense.

Here's a nice thing about the door/window sensor: It had a rechargeable battery. You can slide it off a holder and plug it in for a bit and you're done. That's a lot better than having to periodically replace batteries. It has a low-profile triangle shape rather than the typically big rectangular block that other companies use (even Nest's latest Secure system is bulky in comparison).

One thing we really love is the Cube camera comes complete a slightly weird looking rubber piece (a bit like the Batman symbol) that magnetically attaches to the front of the cube and physically blocks the camera. It's a great and smart privacy feature. And we must say that the tablet controller has a really nice, quality feel to it; solid and a pleasure to hold.

The multi-sensor has its own detachable screw-in stand with a ball joint so you can place it pretty much wherever you want and point it wherever you want. The smart plug glows a low purple when not turned on and a brighter green when it is. The smart light bulbs are lighter in weight than competing products. The color strip feels a little more solidly constructed than others on the market.

Oomi has a range of other products that we haven't had a chance to play around with – a siren, an in-wall dimmer and switch, a water sensor, a simple wall control, a repeater – but we would guess there's been an element of fresh design thinking with each one.

This was a downside to this slightly different approach: It took a while to get used to the system. Things don't work how you expect them to. For example, we keep having problems finding the right screen to do something. Having added a bunch of components, it took 10 minutes to figure out how to get back to the Cube and its streaming video.

As it turned out, the answer was to swipe left on the controller screen. And, somewhat pleasingly, that home page had automatically added more data details from the other components. There were now charts showing humidity and temperature, energy usage, and a time chart of motion detection.

Similarly what was baffling for a while was the physical keypad to the left of the controller that didn't appear to do anything. No matter what you pressed, nothing happened. It took some exploring to discover this was an entirely different feature of the Oomi system – a universal control.

You can fire your various remotes at the Oomi (the Cube, not the controller) and it will store the commands, like a universal remote. It's a good setup – with the ability to select what sort of control you are cloning (music, TV, generic, navigation, numbers, volume, colors, playback). It's very expandable and customizable. It's also a nice idea – a controller and a smart home controller in one.

And that extends to the larger system. You can assign every device to a room. You can group devices together. You can set "scenes" where multiple things happen at once. So, for example, you can set up "Watch TV" and when you tap that command, the lights turn down, or turn a deep purple, the TV turns on, the security system turns on. 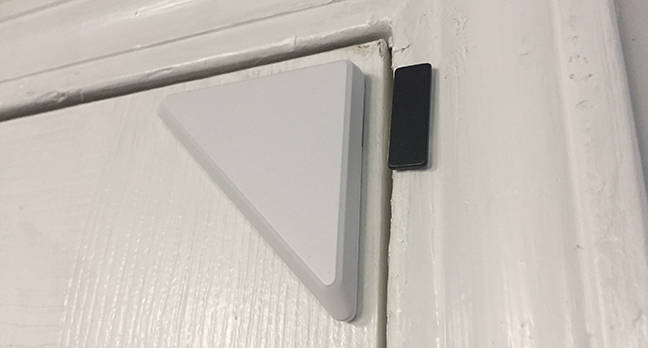 You can automate tasks so when one thing happens, others automatically occur. We set up a system where when the door closes, the color strip turns green, and when it opens, it turns red. It took seconds to set up and worked straight away (although there is a 2-3 second delay). It was a silly test but opens the door to actual useful automations in future.

These things aren't new of course: Apple's Home system is designed to do all this – using an AppleTV as the hub, instead the Cube. But Oomi's approach works too. And, more importantly, it also works with lots of other devices – you can connect it to your Nest thermostat, your Amazon Echo, Philips Hue bulbs and any device using the Z-Wave IoT protocol. There is also an Oomi app for your smartphone.

And then, lastly, there is the security system, which uses the standard approach of Disarmed, Arm Stay, and Arm Away i.e. off, on, and only triggered by some sensors because you're home.

Having connected everything up and set up a few scenes and automations – which, let's be clear requires a certain degree of thought and experimentation that is a little annoying – the Oomi starts to come into its own.

Suddenly the tablet – which was kept hidden away – started making an appearance on frequently used surfaces in the kitchen and lounge. which is what the company presumably intends. And if it was in a different room, then using your phone or shouting out commands to Alexa (the Amazon Echo) served as an immediate backup.

So that's the good side. There are a number of downsides.

For one, we could not get the universal remote to work. That was a shame because if the system functioned well as a remote for your various media systems, it would be incredibly useful. But despite the system appearing to work very simply, no amount of tapping afterwards on the controller had the slightest impact.

We suspect the software is buggy. In fact, as we were reviewing the system, a number of things that just didn't work right suddenly started working – something we are pretty confident stemmed from automatic software updates sent to the system over the internet. A big one was that the speed and quality of the cube camera's live stream suddenly improved one morning. No doubt some back-end tweaking on Oomi's part.